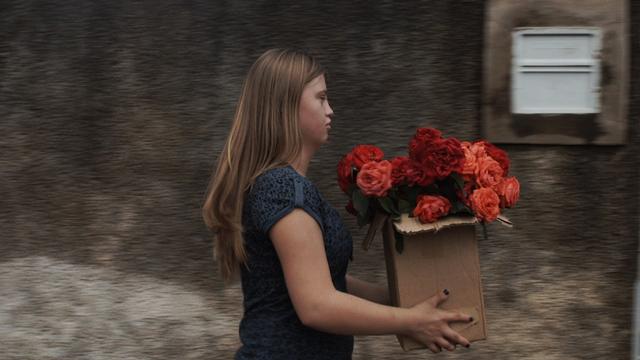 Above: Photo from a scene in the "Marina's Ocean" movie with Marina carrying a box of roses in bloom.

The Disability Art and Culture Project (DACP) presents the 2018 Portland ReelAbilities Disability Film Festival starting Friday, April 20, and running through August 4, 2018. The Film Festival Opening and Disability Arts Event will be in the City Hall Atrium at 1221 Southwest 4th Avenue from 6:30 to 8:30 p.m. The event is free and open to the public.

The community is invited to celebrate this expression of Disability culture and pride with us by experiencing Disability art. There will be:

There will also be film screenings from the Portland ReelAbilities Film Festival:

Marina’s Ocean – A group of countryside students are preparing a special trip to the beach. Marina, a 15-year-old girl with Down Syndrome has a strong wish to visit the sea for the first time. Forbidden to travel with the other kids, Marina starts her own journey towards the Atlantic Ocean.

Bumblebees –A romantic comedy short follows a young man as he prepares for his first date. “You don’t need to find somebody perfect or be somebody perfect, you just have to find another bumblebee to fly with.”

Tale of the Golden Sand – The mythical tale of the sweet town of Merryville, where an unexpected intruder disrupts the daily calm.

The Portland ReelAbilities Film Festival is a partnership between DACP and national film festival ReelAbilities. ReelAbilities is dedicated to sharing the stories, lives and art of people with disabilities. It consists of award-winning films of the highest cinematic and artistic quality and is hosted in cities across the country. ReelAbilities is excited to bring these films back to Portland!

Unlike other film festivals, all the films are captioned, and the organizers provide audio description and ASL interpreters at film showings.

For more information about films, all Festival events, accommodations, or to volunteer: Visit the festival’s website or contact them at pdx.reelabilities@gmail.com.