Photos and Video of the Reception and Report:
Photo booth Photos (@photobruja)
Event Photos (@nikkideleon)
Video of the Report to Council (Our report runs from 06:00 - 1:20) 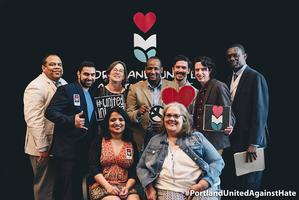 Portland United Against Hate (PUAH) Coalition formed on Valentine’s Day 2017 in response to the staggering increase in hate violence targeting people across the City. PUAH Coalition is a community-city partnership of 58 community based organizations and the City of Portland’s Office of Neighborhood Involvement working to support a safe and livable city by addressing the gap in tracking and responsiveness to hate incidents in Portland.

City Council granted $40,000 to members of the PUAH Coalition in 2017 Spring funding BMP for a pilot project to develop a set of recommendations for a data system to collect, track, and analyze hate incidents. The Coalition reported to City Council on the findings of that pilot project and shared the plans for releasing a beta test version of the Hate Incident Tracking Tool in late May.

The Pilot Project laid out a clear direction for a workable and useful tracking mechanism. It must:

1.Person-centered and honors the narrative of the person who experienced hate to aid in the healing process
2.Not be re-traumatizing or cause more harm
3.Be action-oriented

The tracking tool in development is a unique model. It uses an inclusive approach that offers support services and advocacy resources to the data tracking tool. The Coalition also pairs the tracking system with community-facing capacity building to effectively prepare communities to respond to and prevent hateful acts.

The report ended with testimony from community members and city staff in support of the project, and with City Commissioners sharing their support for continuing this project. In order to continue, PUAH's funding will need to be renewed by City Council in the 2019-20 budget cycle.

The Coalition hosted a reception in City Hall in advance of the report to celebrate the successes of the past year and kick off the next wave of projects.

A huge thank you to the 70+ people who came out to the Portland United Against Hate reception at City Hall and report to City Council! The room was overflowing with joy and determination to build a better Portland. We had a packed house with amazing photos, supportive words from all those Commissioners present, solidarity from a visiting Filipino peace leader, and, most importantly, the opportunity to tell the story of all the incredible work we’ve done and the important work we have left to do. 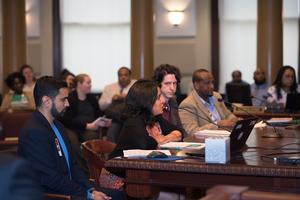 A quick peek into our report:

"I have never forgotten that it was in Portland that government, businesses, and community leaders successfully out organized white nationalists in the 1990's. I believe Portland will do so again,"  Eric Ward, Executive Director of Western States Center.

"[Capacity building and prevention] is just as important as data tracking because we don't just want to know what's happening, but also we want to do something about it," Suleyman Nor, Community Engagement Specialist at African Youth and Community Organization.

"Yesterday I was going to the library to learn ESL so that I can pass my immigration test. This gentleman drove his car towards me and then almost hit me, that made me fear for my life and I went back home [without going to class]," Asli Hassan, Somali community member from East Portland.

"We might not be able to stop the feelings of hate between people, just like we can't stop an earthquake, but we can mitigate the impact, we can support those affected, and we can be prepared. We can prioritize resources that support communities tin building resilience both with and without the City," Kari Koch, PUAH Coordinator.

"You as a community are organizing this to lead not only locally but to serve as an example to other communities around the country that we have our best days ahead as a city, as a state, as a country....I look forward to continuing this partnership for a long time to come," Mayor Ted Wheeler.