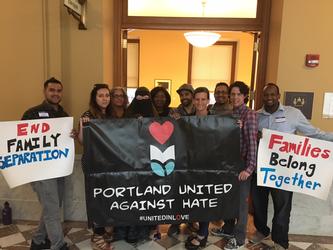 Portland United Against Hate is a community-led partnership of 57 Community Based Organizations, Neighborhood Associations, and the City of Portland. We work to track, respond to, and prevent hate violence in this uncertain era.

The community partners of Portland United Against Hate strongly oppose the Trump Administration and U.S. Department of Homeland Security’s immigration policies and practices. Whether it is indefinite family detention, criminalizing immigrant communities, or jailing asylum seekers at the southern border, these practices are damaging and morally reprehensible. These “zero tolerance” policies are evocative of our country’s dark history and antithetical to Portland values.In the last 6 weeks, nearly 2,000 children have been separated from their parents at the Texas border. In Oregon, it has been a court battle for basic access to legal services for the 121 men being detained in Sheridan. As local politicians speak out and the community holds non-stop rallies and vigils in support of those detained, PUAH stands in solidarity with all those calling for release of detainees and a just immigration system.

Let us be clear, while Trump’s decision to forcibly remove children from their parents has been altered by his recent Executive Order, this order does not have a positive impact on the children currently separated from their families or the families that will now be detained indefinitely. The Executive Order is a direct result of a national outcry of vocal opposition and physical response to inhumane immigration policies. It shows that social movements and local officials can influence national policy, but that we must be vigilant in addressing the fundamental flaws in the immigration system.

This country must pass comprehensive immigration reform that deals with immigration in a moral way and creates pathways towards citizenship.

The Trump administration has all the authority to end these policies and we demand that he do so immediately. We reject any action that criminalizes asylum seekers, immigrants, and refugees. Our coalition calls on people to take action to make Portland a true sanctuary city: