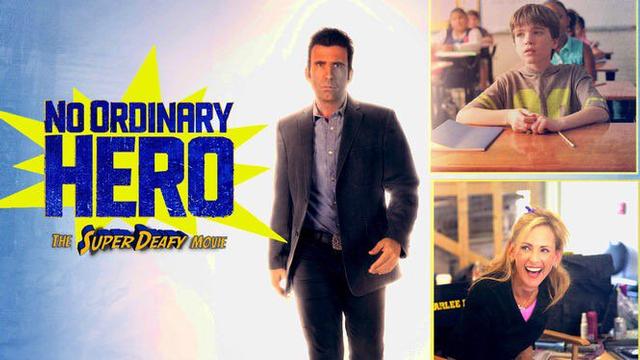 Above is a graphic of the No Ordinary Hero poster with photos of Marlee Matlin and Jacob Lang.

The Disability Art and Culture Project (DACP) has been hosting its second annual Portland ReelAbilities Disability Film Festival this year. The final event of the 2018 festival will feature an integrated and cross-disability dance performance from the Inclusive Arts Vibe Dance Company, followed by a family friendly film in the Plaza at Gateway Discovery Park,10520 Northeast Halsey Street.

"No Ordinary Hero – The SuperDeafy Movie" will be shown by Portland Reelabilities Film Festival from 7:30 to 10 p.m.. Everyone is invited to come for the free performance. The film is captioned, and DACP is providing audio description and ASL interpreters at film showings.

Based on the internationally known SuperDeafy character, No Ordinary Hero (featuring Academy Award winner Marlee Matlin) is the evolution story of a hero in this family drama. While Tony Kane, a deaf actor who plays a superhero on television, looks beyond his cape to influence a deaf boy, Jacob Lang, to redefine what “being normal” means, he also finds inspiration to transform himself. Jacob is being bullied at school and is constantly misunderstood by his father. When Tony and Jacob’s paths cross, they inspire belief in each other and in themselves. Learn more about the film at Wikipedia and view a captioned trailer on YouTube.

The Portland ReelAbilities Film Festival is a partnership between Disability Art and Culture Project and the national film festival, ReelAbilities. ReelAbilities is dedicated to sharing the stories, lives and art of people with disabilities. It consists of award-winning films of the highest cinematic and artistic quality and is hosted in cities across the country.