This month, we explore laws protecting the civil rights of people with disabilities 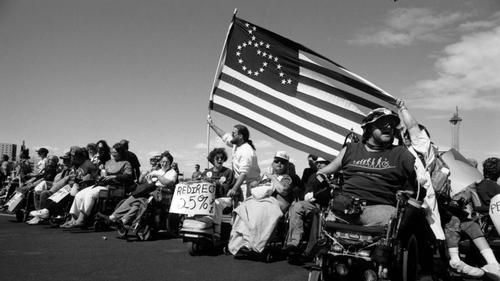 * Group of people rallying for disability rights. A US flag with is held up, the stars depicting the International Symbol of Accessibility instead of the usual 50 stars.*

In honor of back-to-school month, let’s kick off September with a little learning about disability rights. (Don’t worry, there won’t be a quiz!)

This tip will be presented in three parts. This month will focus on some general ideas around disability rights laws and an overview of the Americans with Disabilities Act (ADA). Next month, we will explore what we can DO if something isn’t accessible. And in the last part of this series, we'll touch on other laws that protect the rights of people with disabilities.

Who has a disability?

The word “disability” means different things in different places. For instance, being covered under the Americans with Disabilities Act (ADA), qualifying to receive Social Security Disability payments, being eligible for an organization’s disability-related services, and identifying politically as a disabled person are all distinct things.

Add to this the fact that many community and government programs and services for people with disabilities have additional eligibility criteria and you have a recipe for confusion!

Who is protected under Disability Rights Laws?

Fortunately, the criteria for who is covered under disability civil rights laws is similar across laws. Someone is considered a “qualified” (protected under the law) person with a disability if their physical or mental condition affects one or more “major life activities.” These “activities” are broad and include things like planning, learning, concentrating, breathing, communicating, walking, talking, seeing, hearing, and caring for oneself.

In 2008, the ADA was updated to include bodily functions, like cell division, circulatory and endocrine processes, and more. And to encourage courts to focus less on whether someone had a “qualifying” disability and more on whether discrimination occurred.

It’s important to know that there are no exhaustive disability, accessibility, or accommodation lists in the Americans with Disabilities Act (ADA). The Act was designed to be individualized and treat each situation on a case-by-case basis.

Laws, laws, everywhere! What are our rights?

Next, we will explore three basic questions:

This seems like a great time to mention that I am not a lawyer. If you have specific legal questions, you should call one!

Northwest ADA Center and Independent Living Resources are great organizations for guidance on disability rights laws. They can help you think through which laws apply to your situation and suggest some next steps.

While anyone has the right to file a complaint at any time, filing a complaint is not usually an effective first step to resolve disability discrimination. More on that later.

The Americans with Disabilities Act (ADA)

Now let’s jump into one of the major laws upholding the civil rights of people with disabilities. Hang on tight, because here we go!

What the law covers?

The Americans with Disabilities Act (ADA), passed in 1990, prohibits discrimination against people with disabilities in all areas of public life. It has five sections, or Titles: Employment, State and Local Government, Public Goods, Telecommunication, & Miscellaneous

What must be accessible? Any exceptions?

Almost everything. This expansive law covers schools and workplaces, government entities, public transportation, businesses and organizations open to the public, and television, phone and other communications.

It does not cover faith-based organizations or construction of private single-family homes.

Federal government entities, housing, and air travel are covered under different laws. We’ll touch on those in a later tip.

Under the Americans with Disabilities Act (ADA), employers and organizations also need to provide reasonable accommodations and modifications so that people with disabilities can access employment, goods, and services.

Reasonable accommodations could include things like interpreters, delegating the non-essential parts of a job, or technology to facilitate access. Reasonable modifications include changes in policy, practice, or procedures to create access. This could include filling out a form over the phone, allowing service animals when pets are not allowed, or designating reserved accessible seating at an event.

But wait! I see places that are inaccessible all the time.

New construction must be built according to Americans with Disabilities Act 2010 Standards. For older buildings, read on.

Facilities built before 1991 must remove existing barriers when it would be readily achievable to do so and modify policies so that people with disabilities can access goods and services. Governments are held to an even higher standard.

However, the Americans with Disabilities Act (ADA) includes provisions meant to protect businesses and organizations from having to make renovations or operations changes that would be so expensive or difficult it would put them out of business. This is meant to be a high standard and includes considering all of the resources of an organization.

And there are no Americans with Disabilities Act (ADA) inspectors that check to see if places follow the law. The law is enforced when individuals or groups call attention to the lack of access.

What can we do if something isn’t accessible?

We are going to explore strategies for responding to Americans with Disabilities Act (ADA) violations next month. In a preview of coming attractions, here’s a quick overview of two ways to respond:

1. Reach out to the organization.  It’s usually most effective to start by contacting the business owner or decision maker in-person or over the phone. Be sure to follow up on the conversation in an email or letter. This is the fastest way to resolve many instances of discrimination.

2. Filing a complaint. Anyone has the right to file a discrimination complaint with the Department of Justice or the Oregon Bureau of Labor and Industry at any time. While this is not usually an effective first step, it is always an option.

Why not file a complaint right away? What makes it important to talk to a business owner or decision maker? Stay tuned for next month’s tip on what to DO if something isn’t accessible.

Where we came from and where we’re going

Ever wonder where the ADA came from? This three-minute clip introducing the It’s Our Story project offers a snippet of how disabled people organized and advocated for the Americans with Disabilities Act (ADA). Content warning: suicidal thoughts, violence, ableism.

Podcasts more your thing? Check out ADA Live! for episodes ranging from what it’s like to have a service dog to how small business owners can comply with the ADA.