Why does updating City Code Chapter 3.96 matter?
Revising City Code Chapter 3.96 is important to reflect the scope of the bureau’s current portfolio, services, and constituents. As we do this work, we are being intentional in expanding authentic partnership with communities that want to engage and deliberate with their government. In doing so, we expand community participation to ensure greater inclusion and better outcomes for all Portlanders.

How is Portland changing? How does the city look like today?
Portland is home to a diverse range of communities with unique experiences and interconnected lives. At Civic Life, we weave these distinct perspectives together to inform local decision-making in ways that benefit everyone.

Portlanders have the ambition and ideas to address the challenges that impact their own communities. It’s critical that we respond to the opportunities created by our growing and diverse population now while learning from the experiences of the native and global populations that have long made this place their home. Through the process of revising City Code 3.96, we aim to reaffirm our commitment and responsibility of engaging with all Portlanders to foster and support civic engagement.

Who makes up the electorate?
The demographics of the City population have changed significantly since the last code update in 2005. As Portland transitions into a global city, we offer our communities support from and partnerships with their local government. Together we will create new opportunities for participation. Many communities—including entrepreneurs and faith-based—have not been well represented in our bureau partnerships but whose perspectives are critical to the vitality of the region. We acknowledge that it is important for all Portlanders to see themselves reflected in Civic Life's mission and code.

According to the Voter Participation Data Center in 2016, there were nearly 133 million unique individuals comprising the Rising American Electorate (RAE). Unmarried women, millennials, and people of color were far and away the largest segments, but there is a significant overlap between them. In Oregon, the RAE made up between 50-54% of the eligible voting population.

These numbers are also echoed in Multnomah County demographics. In 2010, according to the United States Census Bureau women, millennials, and people of color combined make up over 50% of the population.

The November 6, 2018 midterm election Voter turnout in Multnomah County was over 70 percent. Statewide, voter turnout was at almost 68 percent. Washington and Clackamas counties had voter turnout at approximately 68 percent and 69.5 percent, respectively. Full Oregon election results can be viewed at the Oregon Secretary of State’s Election Website.

What are the ways to serve our population?
Civic Life will continue to strengthen Portland’s culture of civic engagement and create an environment where all Portlanders feel encouraged to contribute. We will invest resources across a wider range of communities within the city and ensure more people who live in Portland see their experiences, concerns, and aspirations reflected in City-supported programs. Through updating City Code Chapter 3.96, we want to create a culturally responsive framework, inclusive of all Portlanders, recognizing that this path leads to better outcomes and for all. 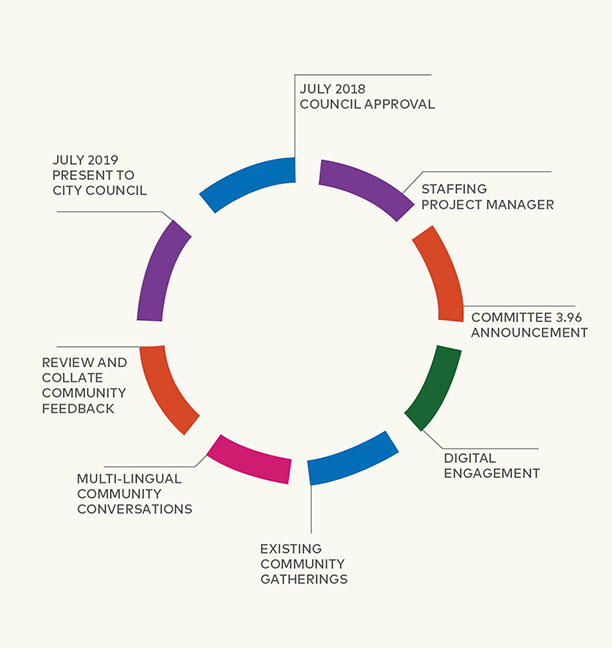