What will the code change do?

The proposed code will:

Why do we need to change the code?

The current code is outdated and does not reflect Civic Life’s current programs, responsibilities, and constituencies. For many years (including in the 2008 Community Connect Report and the 2016 audit of the then-named “Office of Neighborhood Involvement”) neighborhood leaders, city staff, and community partners acknowledged the need to update the current code, which does not address how civic engagement continues to evolve in our city.

What is City Code?

City Codes are the governing laws written in the City Charter. City Code is changed by ordinance passed by the City Council. The purpose of code is to set a strategic direction which can be implemented through administrative rules and policy documents, program design, budgets, and contractual agreements.

Different sections the City Code serve different functions. Chapter 3.96 is part of the Title 3 Administration. Code in this section describes the functions of council meetings, bureaus, offices, and more. Other sections of code describe other specific areas, such as legislation and elections, business licenses, public improvements, civil rights, plumbing regulations, planning and zoning, and more.

It is important to distinguish the purpose of the code under Title 3 as contrasted to other parts of City Code.

The proposed code update 3.96 reflects the purpose of Title 3 Administration, defining the bureau’s organization and function. For examples of how other bureaus have defined their functions, see Chapter 3.16 for the City Budget Office; Chapter 3.36 for the Portland House Bureau; Chapter 3.33 for the Bureau of Planning and Sustainability, and so on.

Every bureau has a chapter of city code, which defines that specific bureau's duties and functions. These can collectively be found here.

The current City Code Chapter 3.96 “creates a framework by which the people of the City of Portland may effectively participate in civic affairs and work to improve the livability and character of their Neighborhoods and the City.” According to Resolution #37373, "Chapter 3.96 no longer adequately represent the Bureau's current programs, responsibilities, or constituencies." This code reaffirms its commitment and responsibility to engage ALL Portlanders in efforts to foster and support civic engagement.

How does an updated Chapter 3.96 better serve Portland?

Portlanders have offered a vision for Portland that has equity, connection, and sustainability as core values. This vision is captured in The Portland Plan (adopted by City Council in 2012), visionPDX (2008) and Civic Life’s own Community Connect (2008) report.  Equity and effective, inclusive systems of community and civic involvement are at the heart of this vision for a growing, diversifying City. The 3.96 code change effort builds upon these City-adopted goals and resolutions as well as the accomplishments and lessons learned from the bureau’s first 45 years.

How does this City Code Chapter 3.96 affect me as a community member?

Community members are currently served through a wide range of programs offered by the bureau, ranging from liquor and cannabis business licensing, to leadership development and engagement partnerships, to community safety programs. In order to serve more diverse communities and our growing City, we are reaching beyond our existing audiences and connecting with groups and communities whose lived experiences, values, and aspirations have not been reflected in Chapter 3.96.

Will this proposed code change dismantle the neighborhood association system?

No. Neighborhood associations are and will continue to be valued partners of Civic Life and the City. These proposed changes are about adding voices to our civic landscape and encouraging collaboration within and across issues, identities, and place. For this reason, Civic Life will continue to serve neighborhood-based groups, which absolutely includes neighborhood associations, as well as other place-based advocacy groups.

This code change is about addition and multiplication, not subtraction and division.

Why is who we name in code and how we name them so important?

Currently, Chapter 3.96 only names three types of groups for “recognition” and “acknowledgment.” When communities are not named in code, policy, or law—or when only some groups are named—there have been devastating impacts for being represented, served, resourced, and valued in this country. The City of Portland has a moral and legal obligation to remedy this by updating Chapter 3.96. In 2019, government must recognize all groups and communities in the ways they identify themselves and ask to be acknowledged by their government.

Diversity and Civic Leadership (DCL) program partners are not named in 3.96 (current or proposed) but are named in other parts of city code.  They are named in the administrative rule (per proposed 3.96.060) for that reason alone:  to address current references in other parts of city code.  No groups have been added or deleted through the proposed administrative rule.

No. City codes are not funding documents. Further, neighborhood coalition offices were fully funded in the 2019-2020 budget and Civic Life will continue to invest in place-based capacity building work.

Here is a graph describing Civic Life's proposed 2019/2020 budget. Note that neighborhood outreach and support is the largest budget line item request with $3.031 million, compared with just $151k for youth programs and less than $212k for immigrant and youth programs. 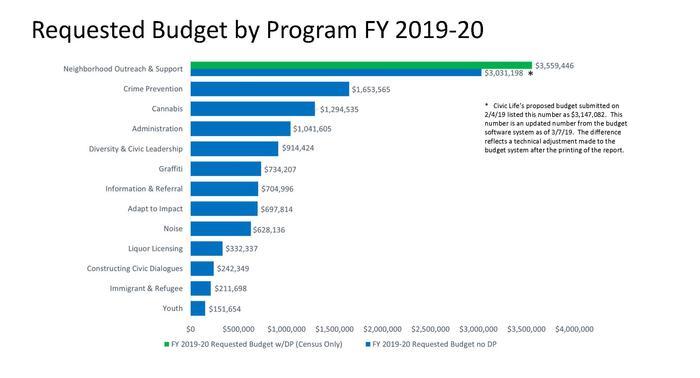 Why name "all Portlanders" in the code?

In such a dynamic city and world, we cannot know how communities will organize and identify in the future. To solve the complex issues we face, we will need everyone’s voices engaged in decisions that impact us all. When we name one type of organization, it becomes incumbent upon us to name every conceivable type of community organization. Inevitably, a list will inadvertently leave communities out, perpetuating a system of exclusion.

Instead, we propose to name all Portlanders as the group who is served by Chapter 3.96:  “The Office serves people who live, play, worship, and/or work in the City of Portland as individuals and through all forms of groups (including but not limited to affinity-, business-, community-, issue-, and neighborhood-based groups) and across generations.”

How was the community engaged in this code change process and what communications took place?

What are public meeting laws? Why are these laws for neighborhood associations changing? Don’t we need accountability?

So why has the bureau required that neighborhood associations and coalitions comply with these laws as a matter of policy?

Proponents say it is to ensure accountability and transparency. The results have been mixed. There are well-functioning neighborhood associations that do not perfectly adhere to all the requirements currently spelled out in code. There are also many examples of how open meeting requirements and the grievance process used to address violations have been weaponized and used to tear neighbors apart. Civic Life wants to keep neighbors together.

Other community and volunteer groups have developed their own community/culturally relevant practices for ensuring accessibility, transparency, and accountability to the communities they serve. Community and other volunteer groups reject the imposition of government rules that make it harder for their members and organizations to participate as a condition of receiving the bureau’s support of their community and civic engagement.

Additionally, the bureau has no mechanism for enforcing these rules. The stated consequence of intentionally or unintentionally violating these rules is “de-recognition” which leads to loss of access to information and other government services. This is legally questionable and unconscionable when these laws were never intended for volunteer groups. To our knowledge the bureau has never “un-recognized” a neighborhood association. Portlanders do not believe that it is a good use of city employee’s time and resources to track the activity of voluntary neighborhood leaders knowing that there is no real enforcement mechanism. There is also no ethically or legally defensible rationale for applying this standard only to neighborhood associations and neighborhood coalitions.

So, what are the mechanisms for transparency and accountability?

When there is an exchange of funds (for example, a grant award or other awarded proposal) Civic Life and the recipient organization enter into a contract that includes but is not limited to guidelines, deliverables, intended outcomes, reporting requirements, and other metrics. This is already the case with our funded partners. When the relationship is one of learning, sharing, and working together on shared goals, the accountability for building inclusive systems rests with government. Chapter 3.96 defines the functions of the bureau, not the functions of community groups. This updated code will direct the Office of Community & Civic Life to support communities through policies and programs that build connections with all Portlanders.

Yes. Government should lower barriers to participation. Many neighborhood leaders over many decades have reported that this high bar has resulted in the unintended consequence of reducing participation in neighborhood associations and has caused harm to individuals, relationships, and neighbors coming together for the common good.

What is the Office of Community & Civic Life?

Civic Life connects the people of Portland with their City government to promote the common good. Its programs create a culture of collaboration, expanding possibilities for all Portlanders to contribute their knowledge, experience, and creativity to solve local problems and make life better in the city we all share. Its mission is to promote a culture of civic engagement by connecting and supporting all Portlanders working together and with government to build inclusive, safe, and livable neighborhoods and communities.

To better serve multilingual populations, we refer to ourselves as Civic Life for short and do not use the “OCCL” acronym. When interpreted or translated into other languages, the term “Civic Life” can be meaningfully conveyed, while the acronym in English is meaningless. For example, in Spanish, the bureau’s name is Oficina de Vida Cívica y Comunitaria (OVCC); in Romanian, it might be Biroul comunității și vieții civice (BCVC), and so forth.