PORTLAND—Portland City Council unanimously adopted principles to guide the City’s public involvement processes on August 4, 2010.  The principles are designed to explain what the public can expect from City government.  Principles include partnership, early involvement, building relationships and community capacity, inclusiveness and equity, good quality process design and implementation, transparency, and accountability.  Mayor Sam Adams commented that the principles would “allow for a higher quality and more consistent level of public outreach.”

Principles were developed by the City’s Public Involvement Advisory Council (PIAC). The PIAC was established by City Council in 2008 to strengthen and institutionalize the City’s commitment to public involvement and assist City bureaus in creating consistent expectations and processes for public involvement activities.  The 34-member advisory council includes both community members from a broad diversity of backgrounds as well as City staff members, representing thirteen different City bureaus.

Commissioner Amanda Fritz commented that she is “very pleased with how diligently the PIAC has worked together and that so many bureaus and community members working together exemplifies the principles of citizen involvement we want to carry forward.”  Commissioner Dan Saltzman said “I think we'll be better served as a result of adopting your recommendations, and I certainly pledge continued cooperation and leadership from the bureaus that I oversee.”

The principles were created over the past 14 months based on extensive research, community input and consultation with City bureaus and City Council offices.  The PIAC submitted the principles to City Council as a first step in a series of recommendations that are being developed to improve citywide public involvement.

The public involvement principles and accompanying documents can be viewed at: www.portlandonline.com/oni/piac. 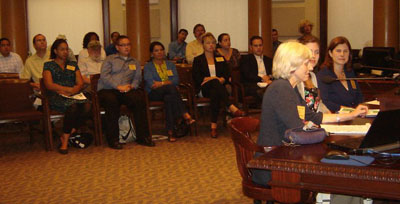 as other PIAC members sit in audience. 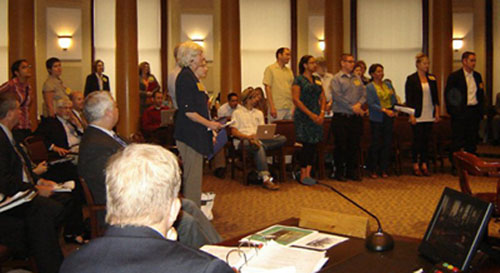 PIAC members stand and are recognized by City Council. 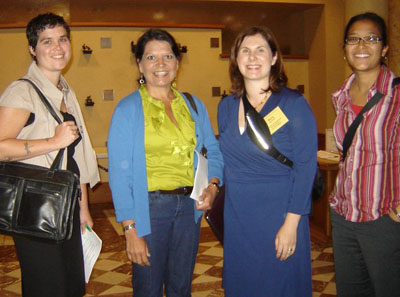 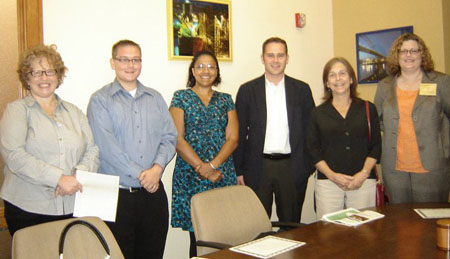