At 8:38 pm, Portland Fire was dispatched to an initial report of an explosion on a skiboat possibly carrying up to (7) souls onboard on the Willamette River, just south of the Sellwood Bridge near Waverly Marina.

Callers from shore reported seeing fire and an explosion just before the vessel began sinking. This prompted a large response including:

Several passengers clung to the exterior of the boat while others were assisted by nearby boats. Rescue Boat 21 was the first PF&R water responder to reach the incident and reported that there was no active fire and all passengers were reported as being accounted for. After RB21 assisted with rescuing the swimmers and transferring them to shore, they were able to determine that the boats stern was sitting on the bottom, and that there were no environmental hazards such as leaking fluids present. All five passengers aboard the boat had stated they had no injuries and declined medical attention.

It was determined that there was no fire or explosion. The boat driver stated that a large wake from another boat overwhelmed the skiboat causing it to sink. Salvage and recovery work will be performed by the boat owner, per the US Coast Guard.

Station 21 is one of PF&R's newest fire stations located at the east end of the Hawthorne Bridge along the East Bank Esplanade. In addition to housing a fire engine, also quartered there is Rescue Boat 21. Station 21 was put in service to improve response times on the Willamette River south of the Downtown core area, including emergencies near the Sellwood Bridge.

Last Thursday, Senator Ron Wyden, his wife Nancy, and their twins visited Portland Fire Station 1 (Old Town) to learn more about what life at an active fire station is like.  After being introduced to the firefighters that were on shift that day the Wyden family got a tour of all the specialty apparatus and fire apparatus housed at Station 1.  Part way through the tour, Engine 1 responded to a call, so the family got to see our firefighters spring into action and respond to the emergency. 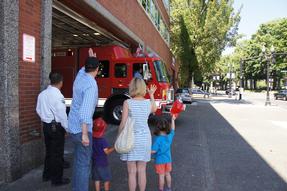 When Engine 1 returned Firefighter Michael showed the children the gear that firefighters wear to go into a burning structure, and described how it works. 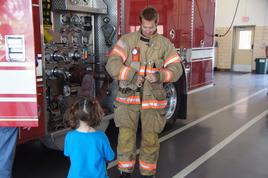 After finishing up the tour, Deputy Chief Nohr answered some questions that the family had about the fire service and Portland Fire & Rescue.  Then the Senator helped his children get the hang of taking a short trip down the fire pole.  There are a total three fire poles in Station 1 that allow firefighters to get from their living quarters on the second floor to the first floor quickly. 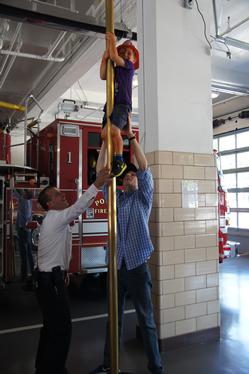 The members of Station 1 appreciate the opportunity to showcase their station to the Senator and his family and hope they enjoyed their time learning more about Portland Fire & Rescue.  Thank you Wyden Family! 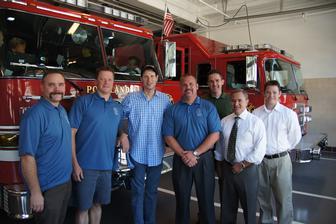 At 3:24 pm Portland Fire & Rescue responded to report of a kitchen on fire at 2205 SE 118th Ave. The crew from Truck 7 (Mill Park) arrived at 3:28 pm and found dark grey smoke coming from the back of the house. Engine 7 stretched a hoseline into the house and aggressively attacked the fire while making sure that no occupants remained inside. Once the search for victims was complete and the main fire was extinguished, fire crews checked inside walls and the attic space to make sure there was no hidden fire.

No injuries were reported during this fire. The fire was brought under control at 3:36 pm and crews remain on scene mopping up. It was determined that this fire was due to cooking on a stove.

Portland Fire & Rescue wants to remind citizens to never leave anything on a stove unattended. In case of fire, the safest option is to always exit your house and call 911 from a safe distance.

Updated information and photos will be given as they become available.

Portland Fire & Rescue has launched our newest issue of the E-Newsletter!  Click here to read the newsletter.

The E-Newsletter focuses on the following topics: