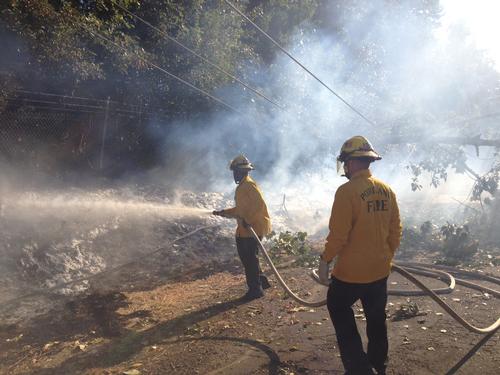 At 9:20 AM, Portland Fire & Rescue was dispatched to reports of a grass fire across from Heron Lakes Golf course, at 3500 N. Victory Blvd.. Further reports indicated that the wind had blown a tree over, which in turn, pulled down energized power lines with it. Battalion Chief Terry Munro was the first to arrive and upgraded the incident to a wildland response.  "We have a Red Flag Alert in the metro area," stated Munro.  "The situation is complicated because of the power lines that are down." 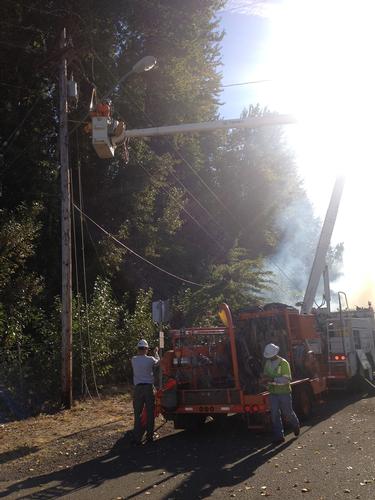 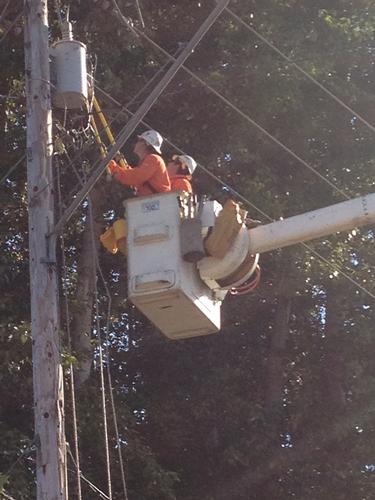 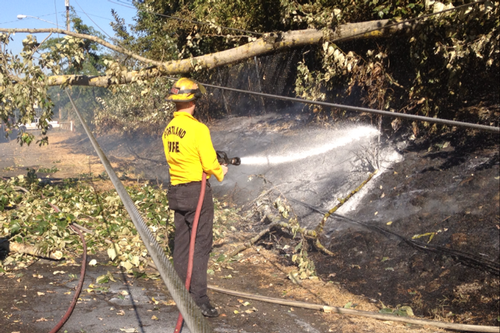 Portland General Electric responds to incidents where their power lines are involved.  These incidents include fires, vehicular accidents and downed trees.  An Eagle Crew is usually sent out first, which consists of 1 trained line person.  If the situation calls for a more resources, they can request a Line Crew, which has 3-5 crew persons.  They carry much more equipment and work to mitigate the electrical problem so that the fire department can do their work.

Portland Fire reminds the public that the Fire Marshal has issued a burn ban.  At this time the only fires allowed in the city of Portland are charcoal and propane barbecues.  The dry conditions, coupled with the high winds that are forecast, create a tremendous potential for fires.

At 2:52 AM, Portland Fire & Rescue received reports of a house on fire at 3610 N. Trenton St..  Engine 26 (Portsmouth/University Park) was the first to arrive and reported heavy smoke outside of the home and that the resident was already out of the structure.  A female tenant in her 60's had 2nd degree burn injuries and was transported by AMR to Emanuel Hospital.

Fire crews entered the residence and reported that the home was very cluttered and that they were having difficulty getting around the house due to the large piles of belongings throughout the home.  After considerable effort, the crews were able to reach the location of the fire and extinguish the flames.

At the time of this release, fire crews were still at the scene and fire investigators were working to determine the cause of the fire.

Excessive clutter, or hoarding, not only can create entering and exiting issues for evacuating occupants, but also can delay fire crews entering the structure. Often, exits are blocked and rooms are filled to the ceiling with stacks of belongings that can easily fall over and entrap firefighters. It's important to realize that firefighters have to navigate through the home in heavy-smoke conditions. Although firefighters may force open an inward-opening exterior door to enter, getting out through the same door may present a problem. In addition, these situations can add tremendously to the fire load, or combustible material in the home.

Weather forecast calls for Red Flag conditions with gusty winds and low humidity. The potential for rapid fire spread is high. Due to the relatively high temperatures combined with predicted winds the Portland Fire Marshal has issued a total ban of all outdoor burning effective immediately. All outdoor burning including recreational fires are prohibited within the city of Portland. This ban is based on weather conditions and community fire safety needs and will remain in effect until weather and fire danger conditions improve.

Citations may be issued to those who violate the outdoor burning ban.

Cooking outdoors in approved propane or charcoal barbecues is allowed during this total burning ban.

Recreational fires, campfires and fires in outdoor fireplaces or chiminea type devices are not allowed during this burning ban.

Future updates will be provided when the burn ban is lifted.

At 12:40 pm, Portland Fire responded to a report of a wildland grass fire at I-5 Northbound where it splits off at I-405. Engine 4 (Portland State University Station) was the first to arrive and reported that an area approximately 100' x 100' was burning, causing a significant amount of smoke.  I-405 northbound was shut down for a brief period of time due to the smoke and to allow the crews to operate safely.

The fire was caused by a construction crew doing work in the area with a cutting torch.  Although the construction company had the proper precautions, which included a water supply,  the dry fuels and wind spread the fire more quickly than they could contain it.

Portland Fire reminds you that we are under red flag conditions at this time.  There is a burn ban in effect throughout the City of Portland until further notice.  All outdoor burning is prohibited with the exception of charcoal or gas barbecues.

Portland Fire & Rescue reminds you that Fire Prevention Week is October 7 – 13, 2012.  Established in 1922, Fire Prevention Week commemorates the Great Chicago Fire of 1871 that killed more than 250 people, left 100,000 homeless and destroyed thousands of homes and other structures.

The National Fire Protection Association’s theme for Fire Prevention Week 2012, “Have 2 Ways Out!”, focuses on the importance of fire escape planning and practice. You never know which direction a fire will come from, and being prepared can save the lives of you and your loved ones.

Make a map of your home; mark a door and window or secondary exit that can be used to get out of every room.

Choose a meeting place outside and in front of your home, where you’ll be visible to the arriving firefighters.

Once you’re out, stay out!

Have a grown-up sound the smoke alarm and practice your escape plan at least twice a year.

Portland Fire & Rescue will participate in this event by featuring a Fire Escape Maze designed for children at the Belmont Fire House from 9 AM-3 PM, Monday thru Friday.  The Belmont Fire House is located a 900 SE 35th Ave. (at the intersection of SE 35th and Belmont).