You potentially live in a Wildfire Hazard Zone. Check the map to see if your residence is in the zone. 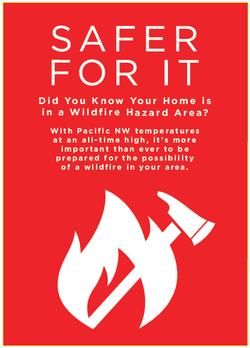 Our wildland environment, though beautiful, creates significant fire hazards that threatens lives and property in the Wildland-Urban Interface (WUI).

You potentially live in a Wildfire Hazard Zone. Check the map to see if your residence is in the zone:  http://www.portlandoregon.gov/fire/article/530161.

Studies show that as many as 80% of the homes lost to wildland fires could have been saved if their owners had only followed a few, simple, fire-safe practices.

Our Ready, Set, Go! Action Guide, which provides the tips and tools you need to prepare, is available to help you. Some quick tips:

Ready! Be Ready. Prepare for the fire threat by creating defensible space around your home, assembling emergency supplies, and planning evacuation routes.

Set! Situational awareness. As a fire approaches, stay alert and know how to receive the latest news and information on the fire from local media, your local fire department and public safety. Pack your emergency items and prepare to evacuate if necessary.

Go! Act early. By leaving early, you have the best chance of surviving a wildland fire. You also support firefighting efforts by keeping the area and roads clear of congestion, which allows firefighters to best maneuver resources to combat the fire.

We urge residents in the WUI to prepare for a wildland fire threat by following the simple steps provided in the Ready, Set, Go! Action Guide available at your local fire station or download it from the Portland Fire & Rescue website at http://www.portlandoregon.gov/fire/article/531507.

It is not a question of IF, but WHEN, the next major wildland fire will occur. Advance planning and preparation are our best defense. Portland Fire & Rescue appreciates your efforts in creating a safer WUI environment for you, your family, and firefighters.

Portland Fire & Rescue and the American Red Cross are joining together for the second consecutive year for a Sept. 11 Memorial Blood Drive to honor those lost during the 2001 terrorist attacks. 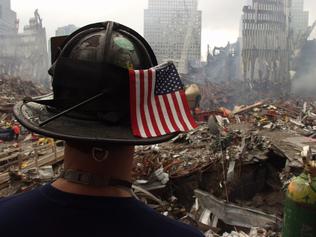 Building on the success of last year's event, the Red Cross is expanding the capacity of the drive this year - with a goal to collect 100 pints of blood. The blood drive is open to the public and members of the community are encouraged to roll up a sleeve to join Portland firefighters in donating blood in honor of the nearly 3,000 people who lost their lives.

Portland Fire Chief Erin Janssens kicked off the blood drive last year because she wanted to offer an avenue of action for those marking this solemn day that has deep significance for first responders.

"On September 11th, our nation's resilience was tested. One way to honor the selfless act of our colleagues and to remember the nearly 3000 people who lost their lives is to join together as a community to strengthen our emergency resources," Janssens says. "Our drive last year was a great success and I know we can top it this year and bring in 100 pints of life saving blood."

Fire Commissioner Dan Saltzman encourages those who are able to sign up to donate.

"September 11th showed us that we must always be ready for the unimaginable. Our first responders train to face worst case scenarios such as we saw on that tragic day in 2001 and their bravery cannot be overstated," he says. "We as a community can also train for worst case scenarios; making sure we have plenty of life-saving blood on hand is one way that we can prepare. Please sign up to give blood on September 11th at Station 1."

"We are thankful for the opportunity to again partner with Portland Fire & Rescue in this lifesaving effort," said Jared Schultzman, communications manager for the Red Cross Pacific Northwest Blood Services Region. "Donating blood is a meaningful way to honor those whose lives were lost during the Sept. 11 attacks, while also helping those whose lives depend on blood transfusions today."

Donors of all blood types - especially O negative, A negative and B negative - are needed. The Red Cross encourages donors to schedule their appointments in advance, but walk-ins also are welcome.

To help ensure equal access to City programs, services and activities, the City of Portland will reasonably modify policies/procedures and provide auxiliary aids/services/alternative formats to persons with disabilities and provide language translation for persons with limited or no English. Call 503-823-3700, TTY 503-823-6868, or Oregon Relay Service at 503-735-2900 with requests or visit:
www.portlandoregon.gov/OMF/CivilRights
www.portlandoregon.gov/OMF/ADA

PORTLAND, Ore. – Teams representing the Portland Police Bureau and Portland Fire & Rescue will square off in the second-annual “Rose City United” charitable match, presented by the Portland Timbers, at Providence Park on Saturday, Sept. 12, it was announced today. The match, which kicks off at 11 a.m. (Pacific), is free and open to the public with a suggested donation at the gate.

Following the successful inaugural event held in 2014 in which the Fire earned a last-minute, 2-1 win against the Police, the second-annual “Rose City United” match is a way of honoring the dedication and hard work that both agencies provide the city. Match attendees are strongly encouraged to bring a charitable donation of non-perishable food for the Portland Police Bureau’s Sunshine Division, a child’s toy for Portland Fire & Rescue Toy N Joy Makers or a $5 cash donation, which will be split between the two charities. All donations will be accepted at Gate 2 at Providence Park starting a 10 a.m. (Pacific).

In addition to the match, visitors will be treated to an array of interactive booths and tours of Portland Police Bureau and Portland Fire & Rescue emergency vehicles on the KeyBank Plaza and inside the concourse at Providence Park prior to and during the game.

Under the direction of Timbers assistant coaches Sean McAuley and Cameron Knowles as guest coaches for the two sides for a second straight year, the match will contain many of the familiar features of a regular Timbers MLS match, including the national anthem, color guard and ball kids. Two, 45-minute halves will be played with a short halftime break.

Download this new app and help save someone's life. 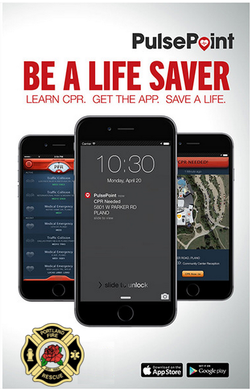 Portland Fire & Rescue is releasing today new technology that alerts people in Portland on their smartphones that they may have a chance to possibly save someone's life who is close by and in distress.

Implemented using Innovation Funding from the City of Portland, PF&R is launching PulsePoint Respond, an app that lets users know when a cardiac event is within their proximity; if they're trained in CPR, they may be able to make a difference before first responders can arrive.

PF&R is also releasing a second app called PulsePoint AED that lets users know where automatic external defibrillators (AED) are located nearby. The chance of saving a victim of cardiac arrest doubles when AEDs are used in addition to CPR.

The PulsePoint Respond app issues an alert and, once clicked, triggers a map to pop up on the smartphone of all registered users who are within a quarter mile of someone in cardiac distress. The PulsePoint AED version will also show the location of any nearby AED devices registered in PF&R's database. Users can help expand the AED database by registering AED locations through the app. Both of the free apps are available through Google Play or the Apple App Store.

New legislation signed by Gov. Kate Brown will require Oregon students to learn CPR before high school graduation. Portland Fire & Rescue also wants to encourage all citizens to get trained in CPR, learn how to use AEDs, and sign up to receive the PulsePoint alerts and respond if needed.

Lt. Fabian Jackson removed the badge from around the neck of his partner since 2008 at an emotional ceremony 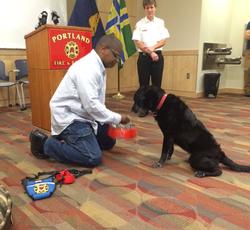 Today, Lila (Portland Fire & Rescue's Arson Dog since 2008) ate her first bowl of food since starting her career seven years ago. To help in her work, her trainer and partner Lt. Fabian Jackson has only fed her bits of food from his hand in full training mode. Today, on the eve of her ninth birthday (the age all dogs who are part of the Alcohol Tobacco Firearms and Explosive (ATF&E) Accelerant Canine Detection Team (ACDT) Program must retire) Lila received a bowl of food from Lt. Jackson that she eagerly chowed down on in front of a bank of television cameras and colleagues from the bureau.

Lt. Jackson, a 27-year veteran with Portland Fire & Rescue, works with the investigations unit and acts as an ATF&E Task Force Officer as well. He and Lila have traveled all over the country to help sniff out accelerants and piece together the cause of fires. Today was an emotional one for Jackson as his loyal partner who has been by his side at all times for the past seven years will no longer be coming to work with him.

Lila started her career as an eight-week-old puppy training to be a guide dog for the blind in Texas. Due to her keen sense of smell and love for birds, Lila was redirected to the ACDT program. Lila arrived at the ATF&E canine training facility six weeks prior to Jackson’s arrival. Lila and Jackson spent the next six weeks learning their new craft and bonding.

Once graduated and certified, the team was called into action from as far north as Ferndale, Washington to as far south as Phoenix, Arizona with the ATF&E National Response Team (NRT). Lila has worked scenes as small as vehicle fires to as large as commercial buildings a city block long.

Lila has worked numerous fire scenes that have resulted in custodies and arson convictions throughout the states of Oregon and Washington. Lila can sniff out 30 fla 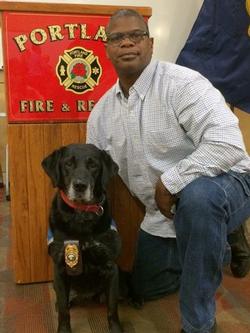 mmable substances. When she detected something, she would sit and look at Jackson for a treat. He’d reward her with fish-flavored kibble.

One memorable conviction Lila helped with was when Portland Fire & Rescue investigators were looking to prove that the man suspected of setting a blaze at the home of his ex-girlfriend was in fact the arsonist. The suspect was violent and had threatened the homeowner. At the crime scene, there were no fingerprints and no traces of DNA. Lila picked up a trail of gasoline spread throughout the house and this evidence was used in part to convict the arsonist.

Lt. Jackson will be going to the ATF&E canine training facility to be assigned and train PF&R’s new arson dog. Lila will join Jackson and his family at home and spend her days relaxing: eating bowls of food, sniffing flowers instead of accelerants, and catching balls not arsonists. PF&R thanks Lila for her service and presented her with a new dog bed adorned with fire bureau patches. 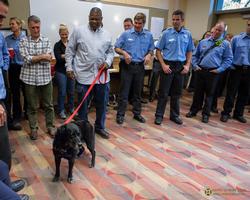 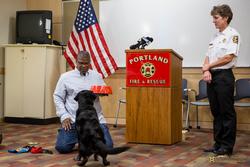 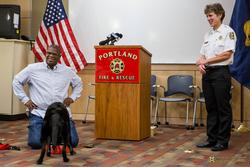 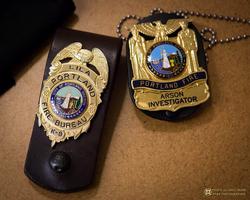