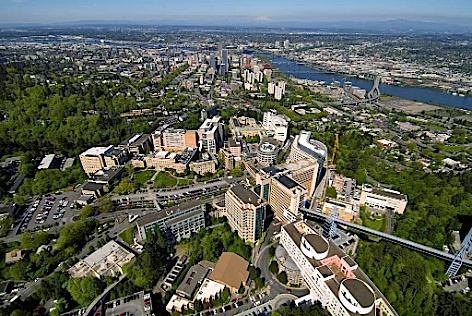 Fortunately, surgical fires are rare. They occur in only an extremely small percentage of the approximately 65 million surgical cases each year. The Pennsylvania Patient Safety Authority published data in 2007 noting that 550 to 650 surgical fires occur nationally each year. 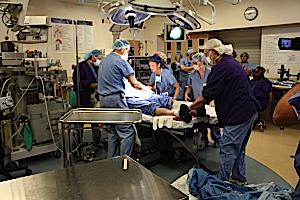 Oregon Health Science University (OHSU) in SW Portland recently stepped up efforts to raise awareness of risks and provide guidelines for surgical fire prevention. On Monday, October 18, 2010, over 300 OHSU surgeons, anesthesiologists, nurses, and technicians across the Marquam Hill campus (including the Center for Health and Healing) took part in operating room fire drills and evacuation scenarios that taught how to fight fires that could potentially occur during surgery. 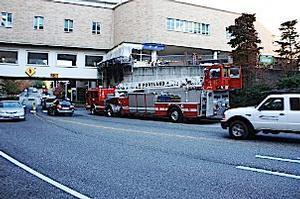 Portland Fire & Rescue (PF&R) firefighters from Station 4 were present during the scenarios and provided feedback during the debriefing session with hospital leaders. The partnership between OHSU and Portland Fire Station 4 was established in the early 90's and has been maintained over the years.  Together, PF&R and OHSU has developed comprehensive response plans that include detailed campus maps with apparatus access and placement, crew assignments, and prefire plans for 34 major buildings on OHSU’s campuses.  These plans have proved to be invaluable over the years and continue to guide PF&R’s responses to major events.

OHSU has training programs and conducts quarterly briefings to educate staff on how to recognize risk factors and prevent surgical fires.

As the State's only health and research university, OHSU brings together patient care, research, education of the next generation of health care providers and scientists and community service to improve the health and well-being of all Oregonians.

OHSU provides leading and often world-renowned educational services through its five schools, and is the only place in Oregon that grants doctoral degrees in medicine, dentistry and nursing. And OHSU is the only academic health center in the nation with a school of science and engineering focused exclusively on human and environmental health.

As a leader in research, OHSU earned $307 million in research funding in fiscal year 2007, with 94 percent of that being money that flows into Oregon from out of state. Additionally, OHSU serves as a catalyst for the region's bioscience industry and is an incubator of discovery, averaging one new breakthrough or innovation every three days, with more than 4,100 research projects currently under way. OHSU disclosed 132 inventions in 2007, many of which open new markets, spin-off businesses and create new opportunities.

as professsional doctors (Oregon Health Science University) whats your comment about changing eye color? in us one comapny stroma working on this 1since 12 years,and other one in Turkey Dr.Mete successfully doing. introduction like that :
So, Can You Change Your Eye Color Safely?
Absolutely yes.Let’s Talk Briefly About Them:First and safest, eye color with laser. Secondly, through surgery with a method called kertopigmentation or corneal tatto.Third, you can change the color of your eyes with an iris implant.Obviously, among these methods, the laser method is the best in terms of both effectiveness and safety.
source: https://mylumineyes.com/