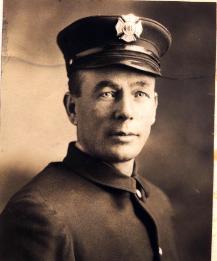 Henry Krimbel was hired by the Portland Fire Department in 1920.  Ten years later, on a Saturday evening, a little before 10 on August 16, 1930, his life would change dramatically. Truck 2 got an alarm to the Counselor Apartments just a block away. Henry was working at Truck 2 at SW 4th and Montgomery. They arrived quickly and it looked like it was going to be a pretty easy job.  The lady that lived in the apartment came home and found the fire going so she pulled the building alarm.  Turns out she’d left a cigarette burning on the couch, which started the whole thing.

Before lines could be placed, the fire started coming out the window of her apartment, which traveled up the side of the four story building.  The smoke spread quickly and extra alarms were called.  It eventually went to a 3rd alarm.

Truck 2’s crew was sent to the roof to help ventilate the fire. They cut holes to release the heat and smoke.  They also found a skylight and decided to open it up.

The smoke had become very thick and with no moon, it was a dark night.  Henry and his crew started working around the edges of the skylight to pry it off.  It finally came loose and smoke poured out.  Firefighters were blinded by the smoke and coughing.  The heat and the smoke became too much and Henry started to get dizzy.  He dropped to his knees to keep his balance but at that moment, the skylight was pulled to the side.  He lost his balance and fell into the hole, about 10 feet to the floor below.

Henry laid there trying to figure out what had happened.  Fortunately, there was no fire at that particular spot and the opened skylight was letting a lot of heat and smoke escape.  He knew he had to get out but wasn’t able to move.  His crew finally found him and got him out.  It was a long trip down four flights of stairs and he was beat up pretty bad.  He was transported to Good Sam Hospital.

Henry was off work for a couple months before returning to Engine 25.  He was able to work, but I was never quite the same.  Something always felt wrong after that but at 45 years of age, he figured that might not be so unusual.  Henry got by at work but life at home was very hard.  He had a 3 year old boy, Albert, at that time and raising his son and caring for his family was the most important thing in his life.

For the next couple years, Henry’s kidneys gave him real problems.  The doctor said they were damaged in the fall.  He said there was nothing he could do so Henry just lived with it.  By October of 1932, the pain had become too much.  By the end of October, the injuries from the fall would finally take Henry’s life.

Henry’s son Albert was then 5.  Albert carried this story through the years and shared it with other family members.