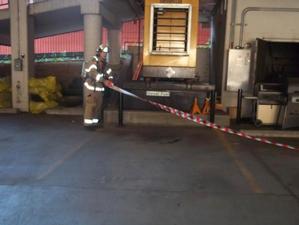 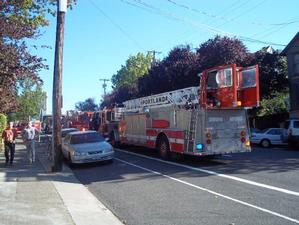 Fire crews were dispatched at 2:31pm to 1501 SW Jefferson, KGW Channel 8’s studios, after reports from the newsroom of a loud explosion below the building.  Heavy black smoke forced the evacuation of all employees.  All occupants evacuated the building safely.

Arriving fire crews determined that an electrical transformer in the vault below the building was the source of the explosion, which occurred on the SW 16th side of the structure. Fire crews pulled hose lines, but used fire extinguishers instead to put out the fire. Firefighters refrained from putting any water on the fire due to the fact that the transformer was carrying 13,000 volts of live power. Spraying water on the fire could have created an electrical arc and endangered the firefighters holding the hose line. After extinguishing the flames, firefighters cordoned off the area and waited for Portland General Electric crews to arrive to assess the situation.

After determining that all floors were clear of smoke, occupants were allowed back into the building. Approximately 30 firefighters responded to this incident. Firefighters turned the scene over to PGE at 3:49 pm.