Want to stay up to date on PF&R's activities? Our site now carries a live feed of news releases

Interested in finding out the latest news from PF&R in real time? You can. Check out our new web feed of press releases from the Flash Alert system that is used to send updates to the media.

Read all of our news releases as they go out here: http://www.portlandoregon.gov/fire/news/index.cfm

And you can also access the feed from clicking on "Read the latest news releases" on the front page of this site.

Want to know which of the City of Portland's 30 fire & rescue stations are assigned to your address? There's now a simple way to do it. If you use our new widget located here and on the front page of our website, you can plug in your address and find out. 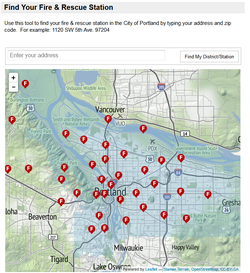 This is the gripping story of how one of our off-duty firefighters helped save a couple trapped in a fiery car on an icy bridge.

This is the gripping story of how one of our off-duty firefighters helped save a couple trapped in a fiery car on an icy bridge. Nick Weichel is a committed firefighter and paramedic, on duty, and off. PF&R is proud of him for always making a positive difference, wherever he is.

ELSIE, Ore. -- A remarkable rescue took place on an icy Quartz Bridge along Highway 26 leading to the Oregon coast Tuesday. Eleven vehicles slammed into one another, some at highway speeds.

One of the cars belonged to Nick Weichal.

“I went to stop but I couldn’t because I'm on the bridge and its icy," he said. "And I just kept pumping the breaks trying to slow down as fast as I can.”

He was on his way home to the rural town of Elsie, 55 miles west of Portland, after a 48-hour shift as a Portland firefighter. His car hit a pickup but not hard. He felt relief.

“Absolutely. I knew I wasn’t hurt. I knew I didn’t hurt anybody else, at least not very badly,” said Weichal.

The relief was short lived.

"I knew I needed to start helping people," he said.

But unlike a fire call in the city, Weichal was on his own with no equipment or other crews to back him up. And in the instants after the crash other drivers were no help.

“I would say all of them were in shock. Nobody, nobody helped initially,” said Weichal.

He began checking vehicles and found a couple in their 70s, John and Jerrie Olson, trapped inside their pickup truck.

The doors were damaged in the crash and would not open. Suddenly, Weichal’s efforts to get the doors open took new urgency.

“I noticed that there's a fire starting in the engine compartment, which is really bad because they're stuck in there. So what I started doing is just prying on doors with everything that I could find. Mainly my hands and after going from one side to the next I figured the passenger side was going to be the easiest side to open.

So after maybe, a minute of trying it finally let loose and I was able to open it,” he said.

The firefighter pulled Jerrie Olson to safety. But her husband, John was stuck. Weichal knew he had to get inside the truck to help.

“The fire started out as softball sized. It was getting really big. And so I just, I climbed in there with him and started pulling on him. I told him, he's gotta help himself and he knew it. But the extent of his injuries made it so it was really difficult for him to help himself," said Weichal.

The dashboard and driver's door pushed in and down during the crash. Now they trapped the driver’s legs.

“And I just kept coaching him as I’m pulling on him. The whole time the fire's getting bigger and bigger to where the point its coming through the windshield and I’m in there with him trying to pull on him, pulling on his hands and his arms and trying to get up underneath his arm pits to get a good grasp,” Weichal said.

In his 11 years as a Portland firefighter, he’d never put his life on the line like this.

“Feeling the heat for sure,” Weichal said. "There were a couple times where I had to get back out of the vehicle to get a good breath of air and get my face out, basically of the flames and, but he couldn’t do that so I just had to keep going back," he said.

Weichal went back five times. As time slowed, the firefighter turned to his faith for help.

“I was asking God for some strength and I didn’t want to give up and I knew it was rapidly approaching where I wasn’t going to be able to help this guy any longer and that's when my prayers were answered and his leg was free,” he said.

On Wednesday, he was back at work, thankful to be surrounded by his gear and other firefighters. He’s also answering the question, why not stay away from the flames and say you did your best?

“Because I hadn’t. I hadn’t given it my best shot. I just needed to try. I don’t know how to explain it. I just, I couldn’t live with myself if I had given up earlier," he said.

Notice something new at your neighborhood fire & rescue station? Portland stations have now been outfitted with a-frame signs that inform folks about the services we provide to the community as long as we're not out responding to an emergency call. So come by, get your blood pressure checked, find out about things like smoke and CO alarms, learn about the fire & rescue resources that protect your neighborhood, and more. 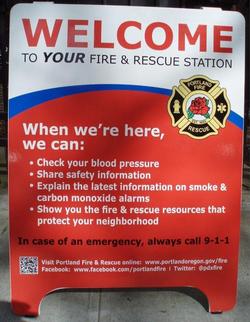 With warmer months approaching, I encourage you to safeguard your windows to prevent a child from falling and suffering serious injury or death. Please share this message with friends with children.

Fires and falls of all kinds are among the leading causes of injury and death in young children. National Window Safety Week is observed annually during the first full week of April to help educate people on how they can keep children from falling out of windows.

Nationwide, approximately 3,300 children fall from windows every year with 70% falling from second or third story windows. In Oregon, about 50 children ages 0-5 fall from windows annually. The majority of those falls happen during warmer months between May and September.

In fact, the young son of one of our very own Portland firefighters fell from his second story window four years ago. Please take time to watch the following video http://www.vancouverside.com/episodes.php?video=Window_Safety_32#form

Children can fall from windows allowed to open more than 4 inches. As parents, grandparents, uncles, aunts, brothers and sisters, we need to be aware of how to keep our children safe.

With warmer months approaching, I encourage you to safeguard your windows to prevent a child from falling and suffering serious injury or death. Please share this message with friends with children.