A 100 years ago on May 30th, Portland Fire Marshal Stevens announced the appointment of three fire officers to a new Arson Squad.

A 100 years ago on May 30th, Portland Fire Marshal Stevens announced the appointment of three fire officers to a new Arson 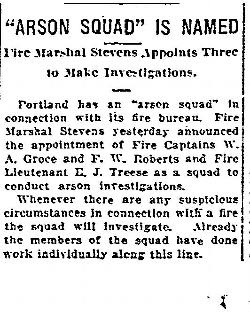 Squad. The three-person team was tasked with investigating any and all fires with suspicious circumstances. The first three members of the team were A. Groce (Captain), F.W. Roberts (Captain) and E.J. Treese (Lieutenant).

The unit, now known as Arson Investigations, has been in continuous operation since then, although tools and techniques have improved. In the 1970s, the Arson Squad members became certified police officers, allowing them to make arrests. In 1992 Investigators brought the first Accelerant Detecting K9 onto the team. Since then the team has had three dogs. Lila, the unit’s current dog, uses her nose to help confirm whether accelerants (flammable liquids) have been used to start fires.

The unit currently investigates approximately 1,000 fires per year. Today the unit has four field investigators who respond directly to fire scenes to determine the cause of fires. The unit also has two investigators assigned to follow up on arson crimes; this team is made up of one PF&R Investigator and one Portland Police Bureau detective. The unit currently boasts one of the best conviction rates in the country at 25%: the national average is 13%.