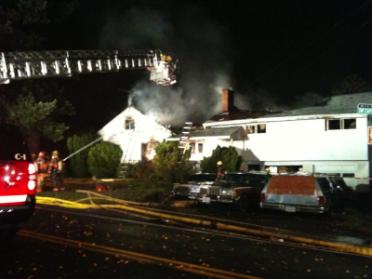 The first-in engine company arrived on scene at 9:22 pm and found a two-story single family residence with heavy fire involvement located at the rear of the structure.  Crews made a quick entry into the structure and advanced hose lines in an attempt to knock the fire down, but shortly thereafter ordered out of the structure because of heavy fire conditions.  Crews quickly retreated and shortly thereafter the roof of the structure began to fail and collapse.  At that point crews were forced to conduct an aggressive defensive attack, but had much difficulty due to the amount of fire from the structure.  Numerous hose lines were required to gain control of the fire, including two master streams- one elevated and one ground level.  There was approximately 2,100 gallons of water a minute being applied to the fire for over two hours.  The structure was overloaded with combustible materials from years of collection.  Some rooms were inaccessible by crews while others were only accessible via pathways.

Fortunately, the two elderly occupants were not home at the time of the fire; it would have been impossible for crews to conduct a rescue had the home been occupied.

There were no injuries to civilians or firefighters.  Crews have not been able to work inside of the structure to extinguish all remaining hot spots because of structural instabilities, but will continue to monitor the residence for the next couple of days.  PF&R apparatus and personnel response included six fire engines, two fire trucks, one rehab unit, three fire investigators, three fire chiefs, and 40 firefighters.

at this time but would appreciate anyone with any