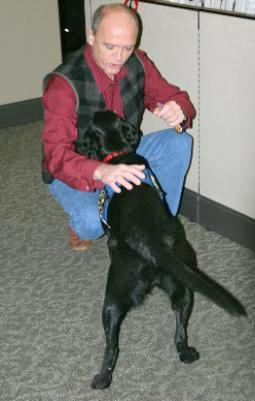 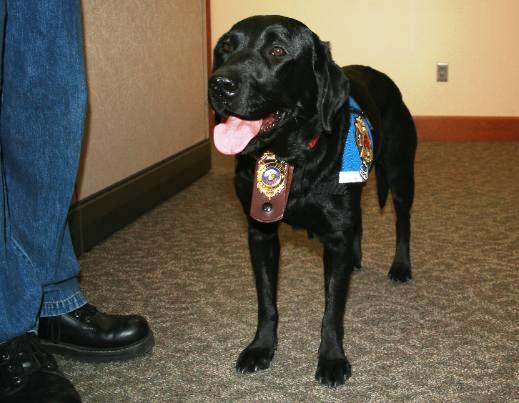 Lila, Portland Fire & Rescue’s Accelerant Detection Canine, and her handler, Lieutenant Jackson, stopped by Commissioner Randy Leonard’s office for a quick meet and greet this morning.  Lila nosed her way around his office, greeting his staff and ensuring all was well.

Click here to read Commissioner Leonard’s blog and see more pics of him and Lila! 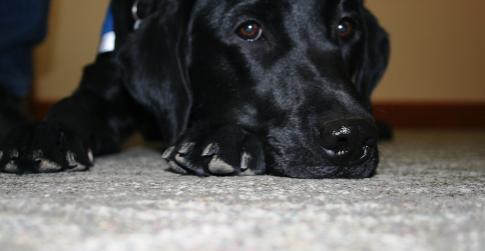 Lila, a black Labrador retriever, joined PF&R and now works with an arson investigator. Lila was trained at the Alcohol, Tobacco, Firearms, and Explosives Accelerant Detection Canine Program. After several months in the program, she met her handler, Lieutenant Jackson. Lieutenant Jackson and Lila trained together in Front Royal, Virginia, for an additional six weeks – seven days a week – before they began working together at PF&R.

Lila, whose official title is “Accelerant Detection Canine,” is conditioned to associate food with successfully detecting hydrocarbons. Lila is very much a food-motivated canine, so it didn’t take her long to catch on. At the end of her training, a chemist certified that Lila can tell the difference between a variety hydrocarbon scents in the small quantities necessary to start fires. This certification is crucial because evidence uncovered by canines and their handlers can be a key point in criminal and civil trials.

Arson canines can be instrumental in the investigation of fire scenes. Trained to detect and alert to microliters of petroleum-based fuels, Lila’s nose can make the difference between determining the cause of a fire or not. Accelerant canines have had better results detecting accelerants than electronic detection devices. Although hydrocarbon detectors can be quite sensitive, accelerant canines can pinpoint traces of accelerants at levels lower than the detectors can register. Additionally, detectors do not discriminate between burned petroleum-based items normally found at a fire scene, like foam cushions, and items that might contain an ignitable liquid. Accelerant canines can, and do, detect those differences.

It should be noted that, while Accelerant Detection Canines are valuable tools in arson investigation, they can not and do not replace the need for thorough and experienced fire investigators and crime labs. The canines can only point to evidence, not determine cause and process. Nonetheless, working collaboratively with a professional fire investigator, a properly trained canine investigator team is the best tool available to find trace evidence of ignitable liquids.

PF&R obtained Lila through a partnership with the Department of Justice’s Bureau of Alcohol, Tobacco, Firearms, and Explosives (ATF). As a part of the ATF’s national response team, Lila and her handler can be deployed to major events anywhere in the country.

Since Lila came to work for PF&R, she and Lieutenant Jackson have been quite active. Positive alerts from Lila are collected as evidence by Lieutenant Jackson and sent to the Oregon State Forensic lab chemist for confirmation. Lila has an extremely high percentage of alerts coming back as confirmed positive. She has responded to scenes where destructive devices (Molotov cocktails) were used on both residences and motor vehicles, fire-related suicides, fatal fires, and intentional fires with the use of accelerants and initiators. Lila has also preformed vehicle and people searches.