Last night, Fire Chief John Klum and Lt. Ted Mayes attended a meet & greet at the invitation of Vincent Johnson, a local golfer looking to make it into the PGA.  We first learned of Vincent’s aspirations when out-of-state friends and family members of PF&R staff started calling to say, “Did you see that kid on the Golf Channel wearing the Portland Fire hat?”

You can watch the video everyone was talking about on You Tube by clicking here:  http://www.youtube.com/watch?v=OQ01_U49cbU.  Turns out that local golf sensation, Vincent Johnson, had a starring role on the Golf Channel’s highly acclaimed Big Break Disney show.  During his appearance on the show, he wore various hats including one from Portland Fire & Rescue. 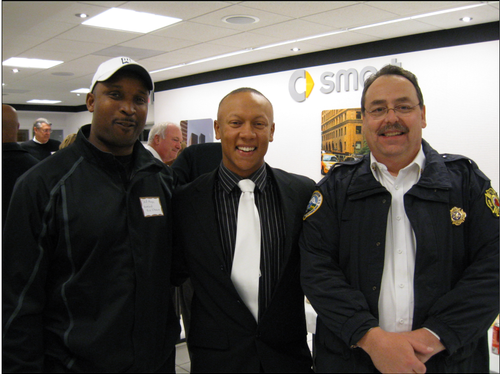 On Monday night, Vincent shared with Chief Klum that golfers are highly superstitious.  He wasn’t doing as well when wearing another hat so he decided to switch to the Portland Fire & Rescue hat.  Apparently it brought him good luck and he wore it for three straight days during the tournament.

Vincent began golfing at age six, is a graduate of Oregon State University and received national attention in February of 2009 when he became the first recipient of the Charlie Sifford Exemption, an honor that enabled him to play in the PGA Tour’s Northern Trust Open. Although he missed the cut by three shots, the experience convinced him that he has the talent to compete on the PGA Tour.

Portland Fire & Rescue wishes Vincent the best of luck as he leaves Portland on December 10th to pursue his quest for success in the PGA.  We also want to thank Vincent for his support of Portland Fire & Rescue and the national exposure that our organization received during his appearance on Big Break Disney.

i’m very hapy today to share this amazing testimony as Dr. Ohioze the herbal doctor was able to cure me from my Herpes Virus with his herbal medicine. i am Arthur from Atlanta.Georgia ,I was been a diagnosed of Hsv2 for a period of 2 years and have tried different methods of treatment to ensure that I was cured of this terrible disease, but none worked for me, i so much believed there’s a cure out there somewhere and we’ve been blinded to the facts that medical doctors hides that from us, i was really desperate as I was losing almost everything due to my illness, A few months ago while I was checking the internet I saw different recommendation about Dr. Ohioze on how he have been using his herbal Medicine to treat and cure people, I contacted him and I told him how I got his contact and also about my herpes virus, after some time he told me not to worry that he would prepare for me his herbal medicine, he told me I would take this medicine for a week and also

asked for my home address to send the herbal medicine through courier service FedEx to me, after the process and everything i received the delivery from FedEx, I took it as i was directed by Dr. Ohioze during the one week, while on medication I
began to experience changes in my body, I had to call my doctor at the
hospital for a type-specific blood test, after the test the doctor told me that
I wasn’t having herpes virus,not a trace of the virus in my blood or my nerves , I really couldn’t even believe it . i’m so grateful Dr Ohioze

Also Get In Touch Doctor Today Directly for your cure via :
website: www.drohiozeherbalcure.com
Email :doctorohioze@gmail.com

Am glad to share my herpes virus experience with everyone and the marvelous work of Dr Harry, with his roots and herbs. i was diagnosed of genital herpes months ago and it has been hell living with such nasty disease until my sister introduce me to Dr Harry whom cured her too. we talked and he sent me herbal medicine which i took for two weeks. i went back to my doctor after a month just to confirm my status cos i stop experiencing the sighs and symptoms, all the pain were gone and now i can boldly say there's a cure for herpes simplex virus without misleading anyone. You can contact Dr Harry too on
WhatsApp +18598135172
website Dcotorharryherbs.com
Email: drharryherbspell01@gmail.com