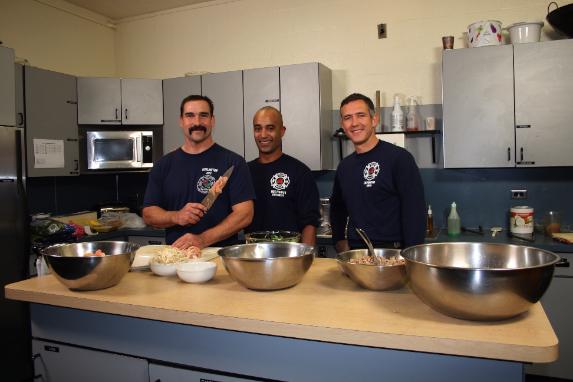 On Saturday, December 12, 2009, Portland Fire & Rescue's Station 1 had the privilege of hosting Food Network celebrity, Guy Fieri, and his production crew for lunch. Guy Fieri is the host of the Food Network's hit show "Diners, Drive-ins and Dives".  Station 1's Lieutenant Rich Tyler and Firefighters Mark Held, Rich Chatman, and Monte Schierling (not pictured) cooked a variety of Thai foods in typical firefighter fashion before sitting down to dig in with Fieri.

"It was an honor to have Guy Fieri include Portland Fire & Rescue in his roadshow showcasing the City of Portland," said Fire Chief John Klum.  Fieri, one of the Food Network's most popular chefs, is currently on a nationwide tour celebrating family, food and cooking. 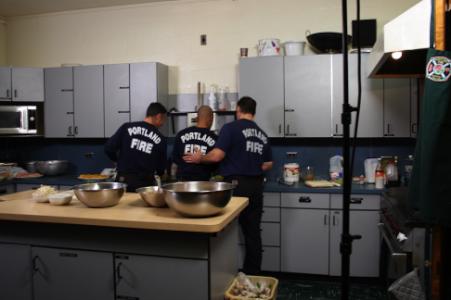 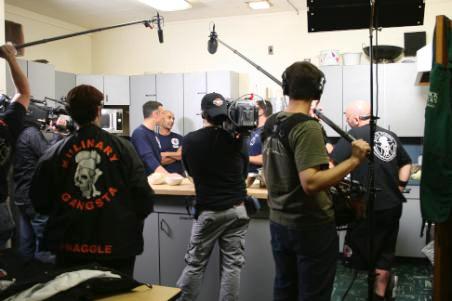 Portland Fire & Rescue was selected because of its long held belief in the importance of meal creation in the formation of comradery and brother/sisterhood for firefighters.  At PF&R, firefighters shop, cook and eat all their meals together, which strengthens their connection with each other.  This is especially importance since firefighters depend on each other for their safety, and often times their lives.

We look forward to watching Portland Fire's segment with Guy in February 2010.  Stay tuned to the Fire Blog for upcoming airing dates and information.  A special thank you to our friends at the Food Network for selecting PF&R to participate in the Guy Fieri Roadshow!  Guy, if you're reading, you're welcome to stop by for lunch or dinner at Station 1 anytime! 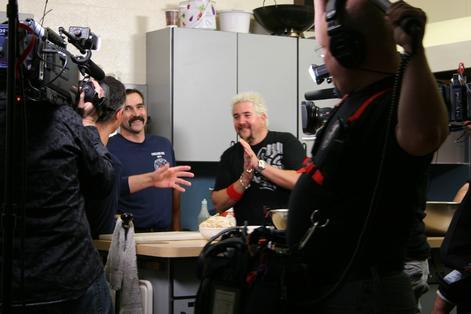 This is totally awesome. What great press for our Firefighters and the City of Portland!

I love that firefighters can cook. This station looks awesome.

I'll be sure to watch this. It looks great. Any article that promotes cooking is good. I'm a big fan of healthy eating and health foods.

And have you seen how much celebrities net worth <a href="https://kryskritters.com">https://kryskritters.com</a>? I did not think so much, it's good to live on a grand scale and not to deny myself anything. Although, on the other hand, not everyone can be known either, you need to have charisma, and an appropriate character. However, everything is in our hands.

What did he make for himself? <a href="https://www.the-medallionmohali.com/">The Medallion Mohali</a>

i’m very hapy today to share this amazing testimony as Dr. Ohioze the herbal doctor was able to cure me from my Herpes Virus with his herbal medicine. i am Arthur from Atlanta.Georgia ,I was been a diagnosed of Hsv2 for a period of 2 years and have tried different methods of treatment to ensure that I was cured of this terrible disease, but none worked for me, i so much believed there’s a cure out there somewhere and we’ve been blinded to the facts that medical doctors hides that from us, i was really desperate as I was losing almost everything due to my illness, A few months ago while I was checking the internet I saw different recommendation about Dr. Ohioze on how he have been using his herbal Medicine to treat and cure people, I contacted him and I told him how I got his contact and also about my herpes virus, after some time he told me not to worry that he would prepare for me his herbal medicine, he told me I would take this medicine for a week and also

asked for my home address to send the herbal medicine through courier service FedEx to me, after the process and everything i received the delivery from FedEx, I took it as i was directed by Dr. Ohioze during the one week, while on medication I
began to experience changes in my body, I had to call my doctor at the
hospital for a type-specific blood test, after the test the doctor told me that
I wasn’t having herpes virus,not a trace of the virus in my blood or my nerves , I really couldn’t even believe it . i’m so grateful Dr Ohioze

Also Get In Touch Doctor Today Directly for your cure via :
website: www.drohiozeherbalcure.com
Email :doctorohioze@gmail.com