In January 2009, Governor Ted Kulongoski has issued a proclamation designating January 27, 2009 as Fire Service Appreciation Day. The proclamation recognizes all members of the Oregon fire service who keep our communities safe from the ravages of fire by stopping fires before they start through prevention, suppressing fires after they start, and by investigating fires to determine how they start. The Governor encourages communities throughout the state to show their appreciation and join this observance recognizing members of their local fire departments and districts for their dedication, commitment and sacrifice.

The Oregon Office of State Fire Marshal (OSFM) is hosting Fire Service Appreciation Day at the OSFM headquarters on Wednesday, January 27, 2010.  A small formal ceremony and brief remarks will begin at 11:00 a.m. Members of the fire service and general public are invited to tour the building to view a variety of displays recognizing members of the fire service for their work in 2009.  Ceremony participants include the Oregon Fire Choir and the Salem Professional Firefighters Pipes & Drums. 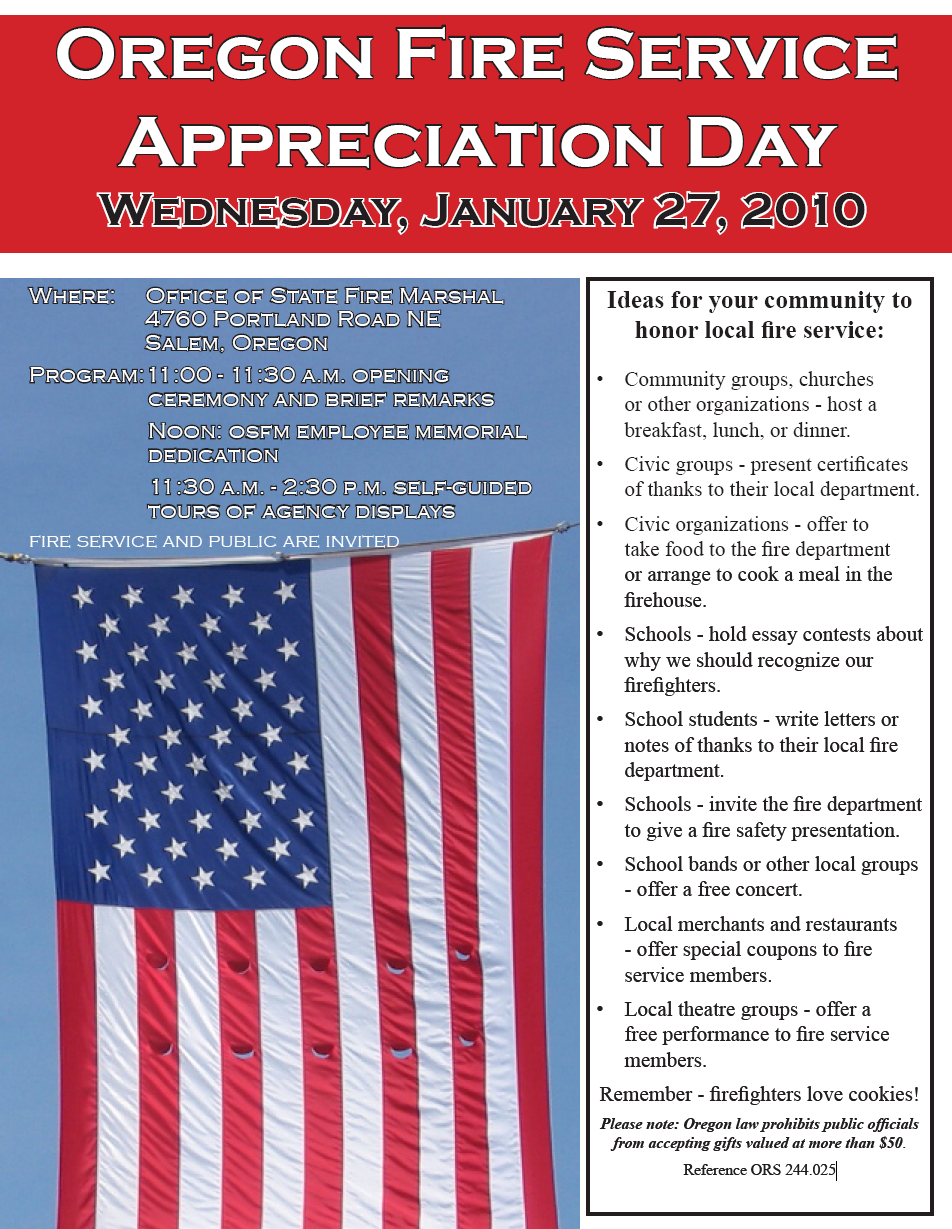 BEST WAYS TO GET YOUR EX LOVER BACK AND RESTORED YOUR BROKEN MARRIAGE OR RELATIONSHIP FROM SORROW TO HAPPINESS.

Help me thank DR LARRY for helping me get my ex husband back to me and my family. This great powerful spiritual man restored my sorrow to happiness. My husband left me some years ago for another woman and they both planned to get married. I am so surprised he just came back to me one cool afternoon on Saturday, begging and crying for me to take him back and to forgive him for breaking up our marriage home and forsaking me and the children. Dr Larry is a true spiritualist savior . He brought my husband back” if you have any worries or you have any problem in your marriages or relationships you can reach him via:

I was despondent because i had a very small penis, about 2.5 inches soft and 4 inches hard not nice enough to satisfy a woman. but none could offer me the help i searched for. i saw some few comments on the internet about this specialist called Dr Adam and decided to contact him , I decided to give his herbal product a try. he gave me some comforting words with his herbal medicine for Penis Enlargement, Within 2 week of it, i began to feel the enlargement of my penis, and now it just 3 weeks of using his products my penis is about 9 inches already,he also have medicine for building muscles,fat burner and belly fat burner,Ed,quick ejaculation,premature ejaculation,low sperm counts and more,on his website at dradamokpoko.com
contact him on adamokpoko@gmail.com   or
whatsapp +2348039715931

I'm just too happy that everything is in place for me now. I would gladly recommend the use of spell to any one going through marriage problems and want to put an end to it by emailing Dr Emu through emutemple@gmail.com and that was where I got the help to restore my marriage. Whatsapp +2347012841542
Https://web.facebook.com/Emu-Temple-104891335203341