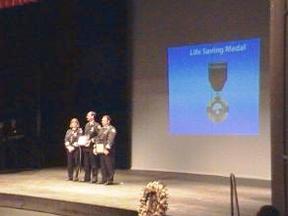 On September 24, 2009, a man wanted for multiple armed robberies and armed with a handgun, came face to face with SERT members and was critically wounded by gun fire. SERT Medics Williams and Bregman rendered aid to the wounded suspect.  Both wore gas masks and readied the suspect for hospital transport.  The medics accompanied the suspect in the ambulance and continued aid efforts.  Their actions were deemed as critical and successful in ultimately saving the man’s life.

Portland Fire & Rescue are proud of Fire Captain Williams and Lieutenant Bregman’s selflessness and decisive actions to save a man’s life.

To read all award narratives presented by the Portland Police Bureau, click here.

Right on! We're proud of you!!

WOW!!! Congrats STEVE!!!
You deserve all the recognition and more for your service to the well being of the public!!!
You are and will always be tops in my book!!!
Congratulations!
Richard