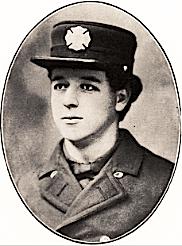 On the evening of February 02, 2010, members from Portland Fire & Rescue Station 19 gathered at the old Station 19 to honor the passing of Firefighter/Hoseman Fred Rittenour. Firefighter Rittenour died while on-duty on February 01, 1923 at old Station 19, located at 6049 SE Stark Street in Portland, Oregon. Although some of the details of the incident have been lost, it is known that Firefighter Rittenour fell from the old hay loft in the hose tower and was pronounced deceased at 9:50 p.m.

Firefighter Rittenour was born on September 08, 1879 and was appointed to the City of Portland as Firefighter/Hoseman on June 01, 1904 after having served in the Spanish-American War of 1898.  He was survived by his wife Alice, and two children. He was buried in Portland, Oregon at the Rose City Cemetery.  Although he is not honored on the Campbell Memorial, he can be found on the Oregon State Firefighters Memorial. The Oregon State Firefighters Memorial, located in Salem, Oregon at the Oregon Public Safety Academy, recognizes all Oregon firefighters who have died in the line-of-duty. Click here to learn more. 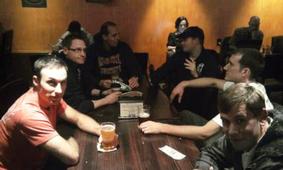 URGENT EFFECTIVE LOVE SPELL TO GET YOUR EX BACK FAST AND TO SAVE YOUR MARRIAGE!

My name is Violet Barnes. I promise to share my testimony to the world once my husband returns back to me, and today with all due respect I want to say a very big thanks to DR PETER for the wonderful work he did for me in helping me to save my marriage, my husband ask for a divorce letter because of the little misunderstanding we had in the past few month, And i never wanted this because I love my husband so much and all our investment was a joint business and I don't want to be far away from my family and my two lovely kids. My friend told me about DR PETER and how he also helped her with her marital issues, so I had to contact him because I want to stop my husband from completing the divorce letter and I want to keep my family together and after contacting him, I was told what I needed to do and when I was going to start seeing the result, I did as DR PETER has instructed and after 2 days my Husband call me and start asking for my forgiveness and it was all like a dream to me and we are all living happily together again all thanks to DR PETER . Contact Him today for any problem bothering you and he will get them solved for you via Email: drpeterspellcaster21@gmail.com text/call WhatsApp number: +234 816 224 7974

I have a few testimony to share with you all about myself, I was in a relationship with my lover for 6 years and we were about to get married when we both have misunderstanding with each other and he ask for a break and we both agreed, after 4 months I head that he was having an affair with my friend Emily and I was very upset and worried so a friend of mine advice me and told me if I still love my ex and if I really want to have him back so I told her yes, and she ask me to contact Great Jumba the spell caster and I did although I never believe on spell so i contacted Great jumba and he ask me to say my wishes , after the casting of the spell i receive a phone call from my ex he was apologizing to me that we should come back together and process with our wedding . I'm so happy and I wish not to ever have this relationship problem again in my life. I will also advise anyone with this kind of issue to contact him for help. He is really nice on the phone and always there to answer your questions and give you the good advice that you need. His email is( Wiccalovespelltools@gmail.com YOU can visit his website : https://drjumbaspellhome.wordpress.com

Hello everyone, my name is Elisa Keily I am so overwhelmed with joy all thanks to Dr Raypower spell. My husband left me for another woman a few years back and I was very devastated cause I never did anything wrong to him, I was left with my two kids and a job that pays little. I was almost giving up until I saw a testimony online about Dr Raypower and I decided to contact him.I explained my problem to him and he assured me I'll see a positive result after 24hurs, surprisingly my husband came back the day after the spell begging me to forgive him and promised to never leave. My husband has been back for 6 months now and we've never had any issues, am glad I didn't doubt Dr Raypower cause he sure can solve any problems with fast relief you can also contact him for help now