She’s competitive, a dog lover, and a Firefighter at Station 5.  Meet Firefighter Christine, the next Face of Portland Fire & Rescue! 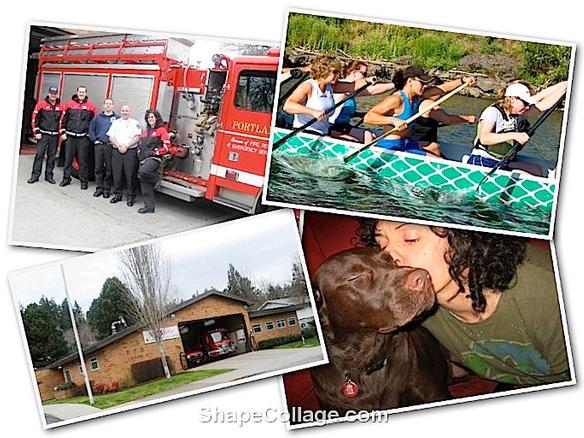 Christine grew up in Inglewood, California, just southwest of downtown Los Angeles with her parents, sister, and brother. She was active in sports from a young age, excelling in softball and soccer as a goalie and later as a forward.  She enjoyed her time at the gym, but made sure to set aside time for other important interests such as church and community service in her neighborhood.

As a kid, Christine helped run the household and was responsible for various chores such as laundry. She learned to entertain herself after school, and developed a strong sense of independence and can do attitude.

After attending a catholic elementary school and a public middle school, she concentrated her efforts at Nathaniel Narbonne High School, Home of the Gauchos, in Harbor City, California. She was the first female to play soccer on her high school mens’ soccer team; she obviously doesn’t take no for an answer!

Choosing to further her education, Christine achieved her Associate of Arts at El Camino College and her Bachelor of Arts in Psychology at California State University Dominguez Hills.  Christine began graduate school, hoping to achieve a Masters in Kinesiology.  She studied anatomy, physiology, biochemistry, and biophysics of human movement, planning to apply her knowledge to the area of exercise science.

Making Her Way to PF&R

Christine worked at the age of 17 in the grocery business, learning all the tools of the trade as a cashier, stock clerk, and courtesy clerk.  After attending college, she became interest in firefighting, and was fortunate to work for the City of Los Angeles Fire Department as a firefighter.  Christine also sharpened her firefighting and EMS skills as an ambulance medic in California and as a member of Cleveland National Forest Hotshot Crew.  As a Hotshot Crew member, Christine worked alongside other highly-skilled wildland firefighters, specially trained in wildland fire suppression tactics.  For two years she worked on the Engine and for an additional four years she responded with her Hotshot Crew to large, high-priority fires in the 460,000 acre Cleveland National Forest which spans over three of California’s counties. The Hotshot Crew also was used as an interagency national resource that responded to fire emergencies all over the United States including Arizona, New Mexico, Colorado, and Montana just to name a few.

After visiting and falling in love with Oregon, Christine moved North. She applied and was accepted to be an elite member of the Mt. Hood National Forest Zigzag Hot Shot Crew.  Christine committed to be available for dispatch 24 hours a day, seven days a week alongside her Crew members to fight wildfires and provide search and rescue.

Unable to shake the firefighter bug, Christine tested with Gresham Fire Department and then with Portland Fire & Rescue after being encouraged to do so by Gresham Fire’s Deputy Chief Jim Klum.  Christine tested with Portland Fire only once and was accepted into the Firefighter Recruit Training Academy.  She feels her testing and hiring success was due in part to the opportunities and tools that PF&R offered to candidates; this included Physical Agility Test practice sessions, mock interviews for the Fire Chief’s Selection Panel Interview, and general support from PF&R employees.

Christine was hired at PF&R on August 23, 2007 at the age of 39 and notes this is one of her biggest achievements.  She brought with her to the job knowledge, life experience, and unwavering determination.  But that didn’t mean she wasn’t nervous before her first day of work at Station 9.  Christine admitted doing a “drive-by,” and stopping at the Station to bring the on-duty crew a pie.  She was scared walking into the station but noted Captain Tracy Cleys was instrumental in making her feel welcome.

Christine has been a Firefighter EMT at PF&R for almost three years and has responded all sorts of calls in the Portland area.  She enjoys the camaraderie and family atmosphere in the stations, the physical aspects of the job, and the flexible schedule.

Her most memorable call occurred on a snow and ice filled Christmas eve.  She and her crew were dispatched and when arriving on scene, Christine observed something struggling to stay afloat after apparently falling through the ice of a frozen pond.  As she got out of the rig, she noticed it was a dog in peril.  Immediately springing into action, she grabbed a raft and rescue line and jumped into the icy pond.  Using her fists, she punched through the ice to get closer to the dog.  She struggled through the ice trying to reach the dog in time, but when she was only a foot away, the dog slumped over.  Christine and crew members pulled the dog from the water, wrapped it in blanket, and performed pet CPR.  Sadly, they were unable to resuscitate the dog.  Christine was emotionally spent after the incident.  She and her crew returned to the station, and the other firefighters continued to check up on her to make sure she was okay.

Living Life to the Fullest

Christine gives 100% to being a firefighter, and at least that much effort if not more goes into her life outside of work.  She enjoys outdoor activities such as running, cycling, outrigger canoeing, and swimming.  She successfully finished the Pacific Crest Half Iron Triathlon, and is a member of Bridge City Paddling Club Dragon Boat Team in Portland.  In fact, Christine and her Dragon Boat Team were invited and competed in the World Games in South Korea last year, bringing home three medals.

Christine believes strongly in finding a cure for leukemia and related diseases and improving the lives of those affected by these diseases.  She takes part in Firefighter Stairclimbs around the Pacific Northwest.  She is currently preparing for the 19th Annual Scott Firefighter Stairclimb in Seattle, Washington on March 7, 2010.  Her goal is to raise $11, 000; to help Christine reach her donation goal for the Leukemia & Lymphoma Society, visit http://www.llswa.org/site/TR/Events/General?px=1078522&pg=personal&fr_id=1090.

Also important to Christine is to support women's involvement in the fire service.  Her and other Portland Firefighters are diligently working on organizing their second “Fire Camp” at PF&R.  Fire Camp will provide qualified young women with the chance to learn about the fire service through live fire training, team building, and equipment education.

With her work and personal life being so full, she still finds the time for the love of her life - a spunky, darling chocolate lab named “Molly.”  Christine and Molly enjoy playing at the dog parks in the Portland area and hiking in the Gorge and on Powell Butte.  Molly is a great frisbee player and looks forward to her milk bone treats.

The most important thing to Christine is being happy.  She’s a honest, hard-worker who is dedicated to all aspects of her life.  Portland Fire & Rescue is proud that Firefighter Christine chose to join our family!

I would like to say, it was a pleasure running into Christine Pezzulo a couple month's back (at a competitive event),as it has been over 15 years since we worked the ambulance together in Long Beach California. I am very happy to see her continuing to pursue and succeed with her dreams.. John Donovan

Chrissy was just a baby girl 2 yrs old when I lived next door to her folks in the late 60's. Her Mom is godmother to my son Michael. Christine was spunky, lively and a beautiful little girl and now to see and read of her accomplishments and caring generosity, stength and ambition is so wonderful to know that she was in my life and I am proud to know her.With deep affection and love