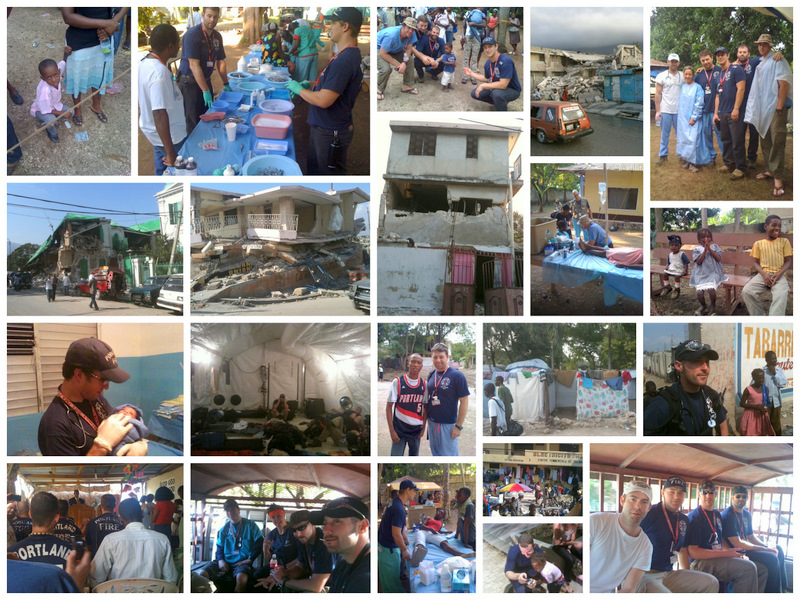 Firefighters are definitely sleep deprived but are pushing through and helping as many people as possible!

A portion of the group waits in a school in Port-Au-Prince to meet and construct a plan of attack with members of Christian Relief International; the group is then sent to a hospital to work for three days.

The group receives a cheer on the flight to Santo Domingo after their mission was announced over the intercom. The group lands in Santo Domingo, Dominican Republic with a plan to purchase food, water, and other supplies before boarding a bus to Haiti. However, after arriving in the Dominican Republic, the group is forced to split up, one group traveling in a small bus and the rest waiting for a Toyota to transport them to Haiti.  The groups arrive finally in Haiti.

Portland Firefighters, Doctors, and Registered Nurses fly out of the Portland Airport headed to lay over in Philadelphia. The group then boards a plane to Santo Domingo Dominican Republic.

Firefighters to Take Part in Humanitarian Effort in Haiti

15 volunteers who are also Portland Fire & Rescue firefighters will be taking part in a humanitarian effort that will be traveling in Haiti and offering aid. The volunteers will be bringing water, food, clothing, and providing basic aid and search and rescue support to the peoples of Haiti.

On their own initiative, the group of firefighters will travel with medical staff and Haitians leaving on February 9th and returning on February 26th.  The group will fly to the Dominican Republic and travel to Haiti on a bus.

To prepare for this trip, the volunteers received vaccinations and have packed sleeping bags, pillows, and camping and food supplies.  Fellow firefighters have stepped up to cover the volunteers’ shifts during their absence.

Wireless access may be available; if so, we will follow their journey on the Fire Blog. Portland Fire & Rescue wishes the volunteers well!

MOST POWERFUL AND HONEST SPELL CASTER ONLINE , THANKS DR LARRY FOR YOUR PERFECT LOVE SPELL . i want to testify of a powerful spell caster who return my ex boyfriend, it all started when i took his phone and saw a lady message him that she enjoyed the last time and i confronted him about it he was angry and and stop talking to me from that day he started acting strange then he told me he didn't want me anymore that he loves someone else i was so diver-stated i cried all day and night he blocked me from his Instagram and on phone so i couldn't reach him anymore this made me sad and cry even the more i was searching for help online when i saw a comment about Dr Larry great work i contacted him and told him about my problems and i did everything he asked me to do he told me after 24hrs my ex will return back to me well i doubted him though because my ex didn't want to have anything to do with me anymore the next day to my greatest surprise he called me and was begging me to give him another chance now we are both happy together all thanks to Dr Larry he can also help you Dr Larry contact info below . assurancesolutionhome@gmail. com or whatsapp him on +1(424)-261-8520.   https://assurancesolutionhome.blogspot.com website http://assurancesolutionhome.website2.me/ youtube https://youtu.be/4shxcyUlqtg https://www.facebook.com/assurancesolutionhome/