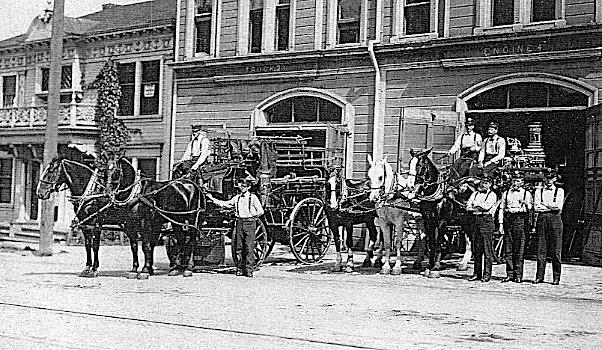 Photo of the Engine and Hose crew at Station 2.

Firefighter Wagner likely isn’t in this picture but that’s what the crews, equipment, and the station looked like in 1890.

Firefighter Fred Wagner was Portland Fire & Rescue's second line of duty death.  Firefighter Wagner died on February 28, 1890, at the corner of SW 7th and Salmon Street in Portland, Oregon.  He was fatally injured while testing a new fire engine.  It would have been a steam pumper at that time.  He was struck in the head by a nozzle and never regained consciousness.  Firefighter Wagner is buried in the Lone Fir Cemetery in the Firemen’s Cemetery.

Firefighter Wagner was 37 years of age and assigned to Truck 2 at that time of his death.  He was badge number 71.  Because he was testing a fire engine, he may have been transferred but at that time, as Truck 2 was housed with Engine 4.  That would be relatively consistent with the location of his death, being fairly close to Engine 4’s quarters.

Firefighter Wagner was survived by his wife and one child.  He most likely was assigned to Engine 4 and was a hoseman or nozzleperson in today’s vernacular.