Station 7, located at 1500 SE 122nd Avenue in Portland, Oregon, serves the Mill Park and Hazelwood neighborhoods.  Home to Portland Fire’s HazMat Team, Station 7 is one of Portland’s largest stations, which houses one battalion chief, two company officers, five firefighters, and two firefighter paramedics.  Crews work in three rotating shifts (A, B, and C shift) with 24 hours on and 48 hours off. 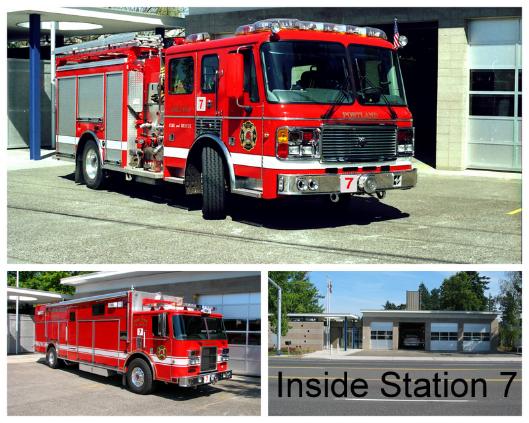 The crews operate a wide variety of apparatus including Battalion Chief 3, Truck 7 (advanced life support), Engine 7 (advanced life support), HazMat 7, HazMat 121, and Recon 7.  Station 7 is one of 13 HazMat teams in the State of Oregon.  In the past year, these trained technicians have responded to 43 HazMat incidents involving situations such as train and vehicle wrecks, trench rescues, fuel, and chemical spills.

Station 7 is Portland’s busiest station.  In 2009 it responded to over 6,100 emergency calls and averaged 17 calls per day.

The crews at Station 7 are highly involved in their community, especially in their neighborhood elementary, middle, and high schools.  Three firefighters are also graduates of David Douglas High School.  During football season, they come out to support the David Douglas Scots.  Every time the Scots score, they hit the lights and sirens, which is a thrill for the players, students, and parents in attendance.

With over 3,000 students, David Douglas High School is one of the state’s largest high schools and has grown 26% in the past 10 years.  This venue gives the crews a chance to build relationships with the adults and children in the diverse community they serve.  The crew reports that by fostering these relationships, they are perhaps inspiring the next generation of Portland firefighters.  Even when attending community events, the crews stand ready to respond to an emergency call within seconds.

Two of Station 7’s crew are incorporating the David Douglas mascot, the Scot, into the station logo which will be proudly displayed on Truck 7 once completed.  The crews are also involved in events at the elementary and middle-school level and regularly participate in career days, conduct first aid classes, cheer on students at field days toward the end of the school year, and visit classrooms to teach kids about fire safety and what to do in an emergency.

On the evening of January 14th, Portland Fire’s Station 7 was buzzing not with the sounds of alarm bells, but with the laughter and chatter of small children.  Led by B-shift Lt. Shon Christensen, this station tour was just one of many outreach events that Station 7 holds for the families and children in the neighborhood it serves.  On this particular night, they hosted about 50 students, parents, and a translator from Mt. Hood Community College’s Head Start Program. 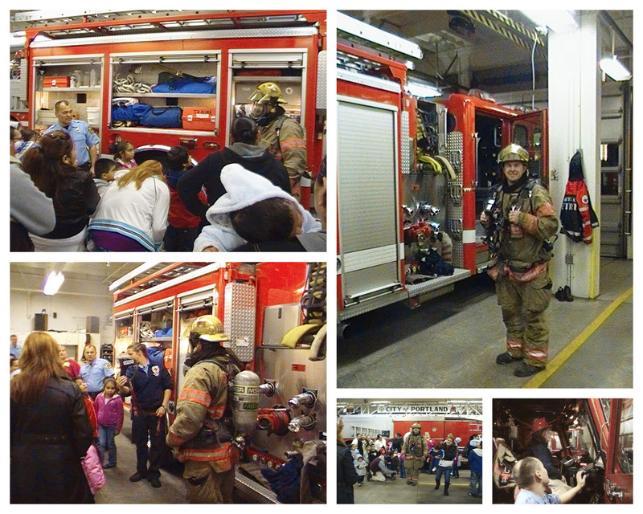 After talking with the kids and families through a translator about what to do in an emergency, demonstrating their turnout gear and air bottles, and letting kids crawl through the cab of Engine 7, the kids moved on for popcorn and a fire safety video in Station 7’s family room before heading home for the night.

Just minutes after the last child left, the alarm sounded and Truck 7 was on its way to a commercial fire on Airport Way - all in a night’s work for the men and women of Station 7.

I received a call last night about 1AM regarding an alarm at 1117 SE 122nd. You seemed to think it was my building or my business that was there. My only involvement with that building was as an architect for some remodeling work, so I'm not sure why I was called.

As I understand it, the alarm was triggered, but no problem was found at the site, so I was glad to hear that.

I'll call the owner to let them know, just in case you were not able to do that.

Thanks for the help and I'm glad there was no problem. I'd be interested in finding out, however, why I was called. I'm just wondering if my name is incorrectly entered in some data regarding the building. If so, that should be set straight.