Portland Fire & Rescue (PF&R) convened its Budget Advisory Committee (BAC) for the FY 2010-11 Annual Budget process in December 2009.  PF&R was directed by the City of Portland’s Office of Management and Finance to factor a 1% ongoing and 1% one-time reduction into its FY 2010-11 budget request.  On December 10, 2009, the BAC met in an all-day session.  At that time, PF&R’s division heads provided members with an overview of their programs, proposed budget reduction packages, the need for some one-time decision packages, and the impact that budget reductions would have on each program.

The BAC, consisting of private citizens, internal and external stakeholders, labor, and management, discussed and subsequently ranked the proposed reductions.  A follow-up meeting was held on January 15, 2010 to announce PF&R’s decision on the budget reduction packages based on the rankings and BAC feedback. 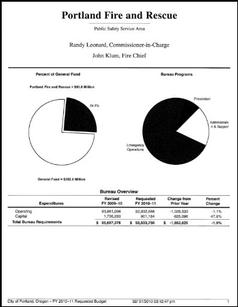 On February 1, 2010, Portland Fire submitted its requested budget for FY 2010-2011 to the Mayor’s Office.  Ultimately, the Bureau proposes to close one fire station (a specific station has not been identified) and delay replacement of aging apparatus (engines and trucks).  If adopted, these cuts will impact service and result in longer response times to emergencies.  Delayed apparatus replacement will lead to a backlog of five engines and one truck and result in increased maintenance costs and the chance of more frequent break-downs.  The budget also requests one-time funding for:  retirement payouts, two limited-term administrative positions, rescues at Stations 11 and 19, a rescue boat, and continuing 12 dive team positions.

To learn more about PF&R's proposed budget for FY 2010-11, visit the links below:

These are the reductions and additions that Portland Fire & Rescue has proposed for our next year’s budget.  Each page is a different program within Portland Fire and includes a brief summary of the expenditures and revenues of the program, a brief description of the change, and the expected result.

This is the complete FY 2009-10 Requested Budgets submitted by Portland Fire & Rescue.  This contains detailed descriptions of Portland Fire, our mission, each fire program, the requested budget, and performance measures for the programs.

The Baseline Template is a new document this year that provides a brief snapshot of Portland Fire. It includes an overview of Portland Fire, a list of programs, employee stats, a brief financial summary, major upcoming projects, performance measures, industry trends, sustainability goals, and online links to key reference documents.

The Program Summary Templates is also a new document that explains each individual program within Portland Fire, including employee stats, in-depth financial summary, and the program rankings assigned by Portland Fire and its community stakeholders.

The Service Improvement Plan is a formal plan to implement improvement to services.

As directed by the Financial Planning Division of the Office of Management and Finance, Portland Fire is required to prepare a five-year financial plan for current service or appropriation level.

While PF&R’s budget has not yet been approved, we want you to know what has been put on the table for City Council to consider.  Next steps in the process include the Community Budget Forums where citizens will have the opportunity to provide input to City Council and Bureau Directors on the Proposed Budget.

You're invited to attend the last Community Budget Forum being held this Saturday, March 6 at the IRCO Community Space located at 10301 NE Glisan Street in Portland, Oregon from 1:00-3:30 pm. Come and share your priorities with the City Council before deliberations.

The public will have opportunity to further comment on the Mayor's Proposed Budget in late April 2010.  City Council is slated to release the adopted budget for FY 2010-11 on June 17, 2010.

Bookmark or link to PF&R's FY 2010-11 Budget webpage at http://www.portlandonline.com/fire/index.cfm?c=52121 to stay apprised of the most up to date budget information for Portland Fire.