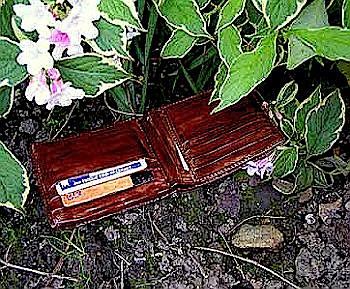 Early Sunday morning on March 7, 2010, Portland Fire & Rescue's (PF&R) Lieutenant Dave rode his bicycle to work his shift at Fire Station 7 along the Spring Water Trail.  He noticed what he assumed to be a piece of plastic up ahead.  Riding closer, he determined the piece of plastic to actually be a wallet.  He stopped, picked up the wallet, and tucked it safety into his backpack, continuing his journey to Station 7.

After arriving at work, Lieutenant Dave looked through the wallet and located a piece of identification with an address. The address was located in Station 7's Fire Management Area or the part of town that Station 7 is responsible for providing emergency response.

Lieutenant Dave and his crew drove Fire Engine 7 to the address listed in the wallet and knocked on the door. Jon Sherriffs answered, and was surprised to see firefighters holding his son's lost (and found!) wallet.

Jon Sherriffs commented on PF&R's Fire Blog, thanking Lieutenant Dave and his crew for their honesty and going out of their way to return the lost wallet.

PF&R is proud of Lieutenant Dave's actions and honesty!

Thanks as well goes out Jon Sherriffs for communicating with us!