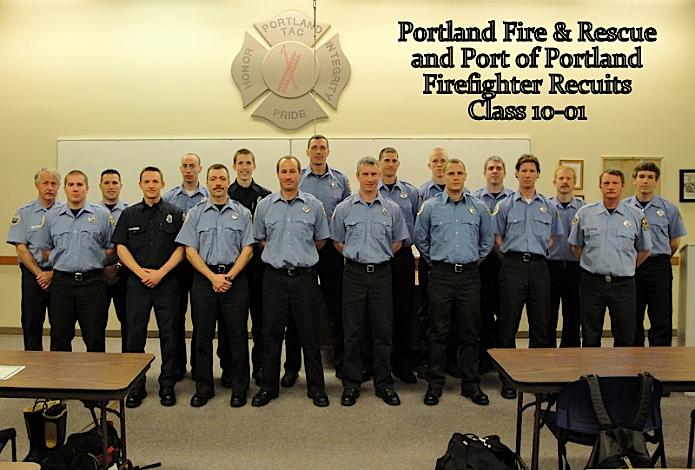 The new Recruit Class, made up of the graduated Firefighter Trainees, Firefighter Recruits, and Port of Portland Firefighters, will be working together for the next four months earning certifications and learning firefighting skills.

This is a huge step in partnership for the Port of Portland and Portland Fire & Rescue. For the next four months, probationary Port of Portland and Portland Firefighters will train 40 hours every week together as one team.  At the end of four months, the Port Firefighters will return to the Airport as Oregon Department of Public Safety Standards and Training (DPSST) Fire Fighter 1's and begin their exciting careers.  The Portland Firefighters that successfully complete and pass the Firefighter Recruit Academy will continue their probation at Fire Station 2 where they start 24 weeks of shift work (24 hours on/48 hours off) and receive further training while responding to various emergency calls.

This new partnership in Training will open doorways to both organizations and lead the way in adding Gresham Fire Department's newly hired Firefighters into a future Training Academy.

My name is Kyle Milks and I am a volunteer firefighter and I am branching out to other departments to see which one would be a good fit for me down the road and see how other departments work. My question is how can I sign up for a ride along?