Onessia was welcomed into the world in August 1972.  She was born in Milwaukie, Oregon, but also spent her time as a child in NW Portland and Tualatin, Oregon and La Center, Washington.

As a child, she enjoyed playing soccer, following the sport all the way until sophomore year in high school. She cheerfully remembers many visits to the library and the Enchanted Forest with her mom and great aunt. She also developed a musical ear, playing song after song on the piano.

Early on, Onessia displayed a strong work ethic and strived to have a cheerful, upbeat, and can-do attitude.  She attended high school in La Center, Washington and at Milwaukie High School in Milwaukie, Oregon playing soccer and performing as a dance team member.  She had a knack for difficult math and chemistry, but still needed more of a challenge.

In addition to high school studies and extracurricular activities, Onessia worked as a server and cashier in Milwaukie, Oregon at China Express and Pietros Pizza and as a greeter and hostess at the Confetti Club in Portland, Oregon.

After junior year, Onessia earned a General Equivalency Diploma credential and set off to make her mark in the world!

Making Her Mark in the World

Onessia enrolled in the Milwaukie Beauty School in Milwaukie, Oregon.  She received quality training, hands-on experience, and graduated as a beautician. She also attended the Columbia College of Business and graduated with a secretarial administrative assistant degree.

At 18, Onessia was blessed with the birth of her beautiful baby girl, Michelle.  Her mother and aunt helped watch the baby while Onessia worked hard to support her growing family.

Putting her post-high school education to work, Onessia worked at Great Clips as a receptionist, hairstylist, and was quickly promoted to a general manager. She kept her eyes open for other career opportunities that would not only broaden her skill set, but provide her with increased responsibilities, challenges, and career growth.

Moving forward, Onessia was hired as a customer service representative at Wanke Cascade, a floor covering wholesaler. Onessia excelled at being attentive and providing quick and efficient service to customers. She found that she possessed a knack for understanding customer’s needs and making their experience as enjoyable as possible.

Onessia left Wanke Cascade and was hired in 1998 as an Office Support Specialist I at the City of Portland’s Water Bureau.  She explored her way through the City of Portland, transferring, working, and taking promotion opportunities at the Office of Management and Finance and the Treasury Office.

These positions increased her knowledge and allowed her to grow in the areas of deferred compensation, financial laws and regulations, customer service, billing and timekeeping, record-keeping, file maintenance, scheduling, and computer applications. 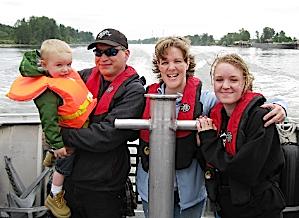 I am so proud of Onessia! She has demonstrated remarkable gifts during her life and career. She has raised my granddaughter, Michelle (age 18) and my grandson Nathaniel (age 3) with style and grace and dedication. Anyone who knows her knows of her intellect and quick sense of humor. It is such a blessing to us all that she truly cares about people. She loves her firefighting family and has been so committed to her work with the Portland Fire Bureau these past few years. This is a great article about her! Thanks so much for honoring her.

Onessia,
It is a pleasure meeting you, if only by stories from your mother and now this internet article. I have met your lovely daughter and perhaps will meet you and the rest of your family in the future. I can tell by this article that you have a heart as big and full of love as your mother's. Michael & I appreciate people who work with groups we all depend on and often are taken for granted like the Portland Fire & Rescue.
the best to you and your whole crew,
Chris & Michael VonTanner