When a structure fire flares up in the City of Portland, a specified number of crews will respond.  Using our Computer-Aided Dispatch (CAD) system, 9-1-1 dispatchers will send the four closest available engines and at least one ladder truck to put the fire out and rescue any occupants.

Every major fire response and all residential fires in the City of Portland will also have two battalion chiefs assigned.  The first chief to arrive on the scene of the fire will assume Incident Command.  The Incident Commander (IC) evaluates the scene, plans the strategy for attacking the fire, and makes the assignments for crews by communicating over the radio. The second arriving chief officer becomes the Incident Safety Officer (ISO).  The sole responsibility of the ISO is to ensure fire fighter safety. 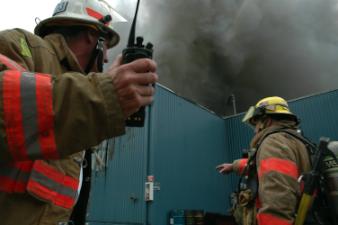 In the dynamic world of an active fire, anything can happen.  Sometimes there are warnings signs before a backdraft or before a building collapses, but you have to recognize the indicators.  With an ISO, you have someone who is watching the structure for signs of imminent collapse. The ISO will look for bulging walls, sagging rooflines, and other indicators that it is time to withdraw from the burning structure.  The ISO also keeps an eye on fire conditions and watches for changes in smoke production. Even the color and quantity of the smoke indicates where the whole operation is headed.  Radio communications, crew assignments, water supply details, and utilities are other details the ISO has to keep an eye on.  The ISO has the ability to walk the fire ground looking for hazards and act as the eyes and ears for the IC who must remain at the command post. ISO updates to Command are vital because the IC will use them to formulate the plan of attack.  One more important aspect of the ISO's job is that they can halt unsafe operations.  If they see something unsafe the ISO has the power to stop the operation immediately.  Having an ISO on scene at all working structure fires is one of the best safe guards we have against fire fighter injury. By dedicating one person to observe conditions and actions we have a greater chance of fending off disaster before it hits. Until next time - be safe!

This has been very fortunate for you as it is imperative that you need to expand
your current company.
http://straight2voicemail.com.au