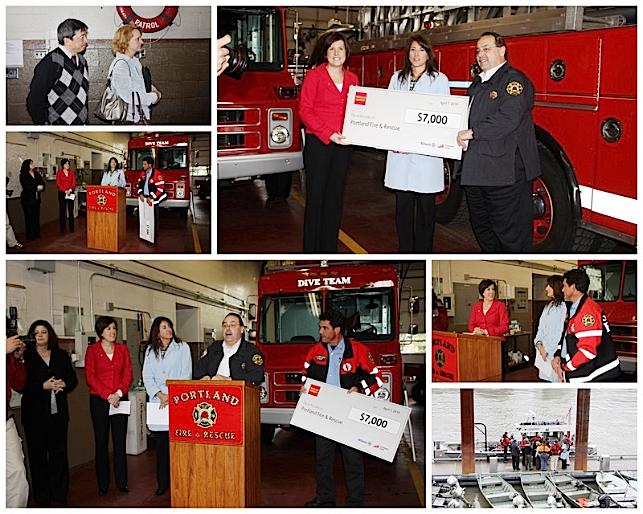 Portland Fire & Rescue (PF&R) accepted a $7,000 dollar grant from Wells Fargo Insurance Services in conjunction with Firemans Fund Insurance. This is the latest in a long line of grants from Firemans Fund, and has been used to purchase a Forward Looking Infrared Radar (FLIR) system for one of PF&R's Rescue Boats. This FLIR system will greatly enhance the capabilities of the rescue boats and allow firefighters to "see in the dark" allowing for quicker rescues at night or in stormy weather on Portland's waterways.

This afternoon, the media was invited to join PF&R Fire Chief John Klum and representatives from Wells Fargo Insurance Services and Firemans Fund Insurance for a live demonstration of the FLIR system at PF&R Fire Station 21.  A ride-along on PF&R's Rescue Boat wrapped up this event.

With this $7,000 grant, PF&R will have received a total of $99,635 in grants from Fireman's Fund Insurance Company and their Heritage Program since November 2006. The program has awarded more than $25 million in grants to over 1,500 fire departments/fire service organizations through the Heritage Program and more than $330,000 in grants have been awarded in the state of Oregon.