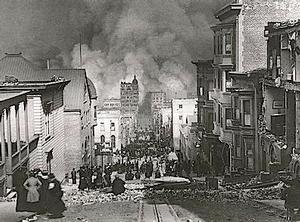 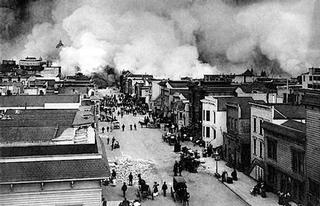 April 18th marks the 104th anniversary of one of the United States’ most major earthquakes and fire disasters.

At 5:12 am on Wednesday, April 18, 1906, a major earthquake struck San Francisco, California and the cost of Northern California.  The earthquakes magnitude was estimated to be between 7.9 to as high as 8.25. Shaking was felt from Oregon to Los Angeles, and as far inland as central Nevada.

The earthquake caused fires to start from overturned lamps and stoves and quickly destroyed San Francisco’s water mains.  This made it nearly impossible for firefighters to fight the blaze.  The fire lasted for three days until the decision was made to dynamite entire city blocks just to prevent the fire from spreading.

The death toll from the earthquake and following fire was estimated to be above 3,000 and is the greatest loss of life from a natural disaster in California’s history.  The earthquake and fire also destroyed close to 300,000 structures.

How can you better prepare and be ready for a natural disaster such as an earthquake? Visit the Portland Office of Emergency Management’s (POEM) website at http://www.portlandonline.com/oem and learn more about:

Citizens are also welcome to attend a free Brown Bag event today, April 19, 2010 from 12 noon to 1:00 pm, to learn how to sustain food, water, shelter and sanitation necessities for you and your family after a disaster.  The event will be held at the Portland Building located at 1120 SW 5th in Portland, Oregon in the Second Floor Auditorium.