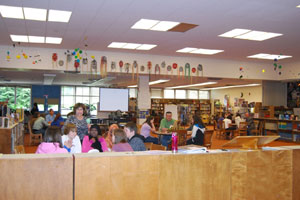 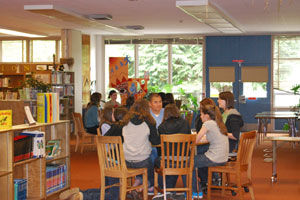 On April 22nd, PF&R Recruiter/Firefighter Terry Foster visited Jackson Middle School in SW Portland to participate in their Career Pathways Day.  Terry and other community volunteers showed up in street clothes and were each assigned to a table.  It was the kids’ job to ask questions and try to guess what Terry does for a job.

Group after group of kids took their turn at asking questions and trying to guess Terry’s occupation.  Once it was revealed that he was a firefighter, the students then had the opportunity to find out all about careers in the fire service.

On “Take Your Kid to Work Day” this was the perfect activity – Terry brought work to the kids.  Thanks to Jackson Middle School for the opportunity to participate in this event.