Firefighter Jesse Hellwege from Portland Fire Station 22 was one of 15 Portland Firefighters to independently volunteer their time and efforts to the relief effort in Haiti in February.  After the destructive magnitude 7.0 earthquake shook the small Caribbean island of Haiti, Jesse and others began researching and emailing local organizations such as Red Cross to find a way for them to help.  He and fellow firefighters from his group learned of an organization called Society for Haitian Arts and Culture, a Pacific Northwest based non-profit that works to continue educating of Haitian culture and from there, the group focused their efforts and began planning for their volunteer trip. 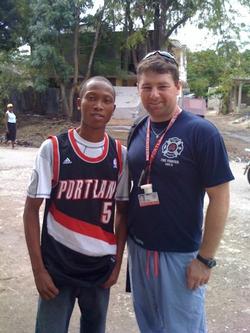 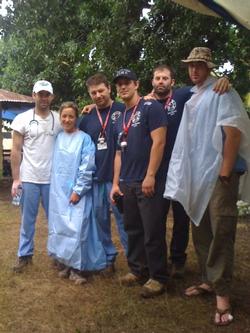 Arrangements were soon made as was fundraising for travel, gear and relief expenses, including donations made by Gerber Gear and Keen Footwear, but a main preparation included informing family and friends about their decision.  Traveling abroad for three weeks to a highly volatile and unstable environment left some family members apprehensive to the idea.  However, they quickly accepted the fact that these firefighters would be carrying out a selfless act that would be good for the people of Haiti.

When asked about traveling from Portland to Haiti, Jesse responded, “The trip to Haiti was horrible.”  The two and a half days of travel comprised of plane flights from the PDX airport to the Dominican Republic, multiple crowded bus rides and even a rough and rickety ride in the bed of a pickup truck that finally landed them in their destination of Port-au-Prince, Haiti.

“I didn’t really know what to expect," says Jesse.  Yet the support of his firefighter team and the encouragement of the local staff at the Quisqueya Christian School where they worked helped make the trip more bearable.

While in Haiti, the team of firefighters volunteered their skills for the medical relief of those in need.  Working with Crisis Response International, their skills were put to use at a clinic located in the dirt where they saw about 500 people a day.  Jesse explained that in the U.S. you have a lot of protocol you have to follow concerning what you can and cannot do to help people.  In Haiti, all of that “goes out the window” and you just try to help them as much as you possibly can.

Translators helped to ease the barrier between English and Creole (a branch-language of French) but Jesse had continued efforts from a local Haitian boy to teach him numbers and letters from time to time; unsuccessfully Jesse might add.

There was never a time that Jesse said he felt unsafe or fearful but three weeks of continuous working, whether it was treating people or helping unload supplies from trucks, was quite exhausting.  He reports that it was nice to see other people helping out as well; not just fellow Portland Firefighters but other volunteer groups from Canada, Germany, Switzerland and Japan.  This earthquake really was a time for the world to come together and lend a hand to the Haitian people amid the destruction.

By the time three weeks had passed, Jesse and his fellow firefighters were ready to go home.  They felt good about all they had accomplished in Haiti even though there is still more to be done.  Once back home in Portland, Jesse’s family and the family at the fire department loved hearing stories about his experience- the people, culture, and food including his description of his frequent breakfast: a cold, liquid, drinkable oatmeal. Yum.

When asked if he would go back to Haiti, Jesse answered, probably in 10 years to help out with more relief aid.  Jesse also says that after his experience there in a place that has limited running water, no fridges and even complete buildings that have been destroyed “you can kick me anytime I complain.”

Contributed by:  Cece Marshall - Guest writer and Journalism student at the University of Arizona and Firefighter Jesse Hellwege - Station 22 B-Shift