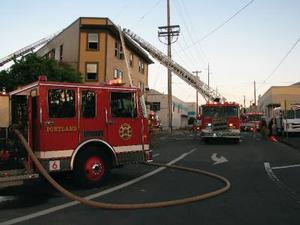 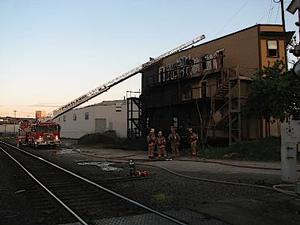 Portland Firefighters responded to a commercial fire this evening at 2400 NW 21st Avenue.  The call came in at 7:28 pm.  The first crews arrived at 7:32 pm to find a three story commercial structure with heavy smoke and fire coming from the east side of the building and extending up to the attic and roof.  A 2nd Alarm was called at 7:33 pm.

Although the building was later found to be vacant, crews were concerned that there could be transients inside.  Firefighters quickly accessed the structure, got up to the top floor, cut vent holes in the roof and were able to put out the fire after an aggressive attack. 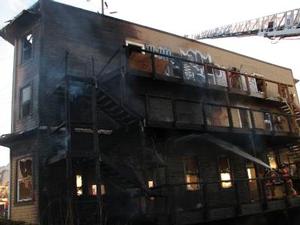 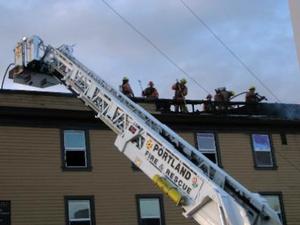 There were no victims or injuries.  However the building, which was built in 1902 and was 5,865 square feet, sustained an estimated $241,000 damage.  The building was valued at approximately $730,000.  Trains were delayed and train tracks temporarily shut down because of hose lines laying across the tracks.

The fire was brought under control at 8:04 pm.

Approximately 70 personnel were called to fight the fire, including:

Fire investigators are at the scene and the fire’s cause is under investigation.  PF&R attributes its success in efficiently extinguishing this fire and saving the building from further damage to our ability to assign multiple resources quickly on the front end of fire calls.