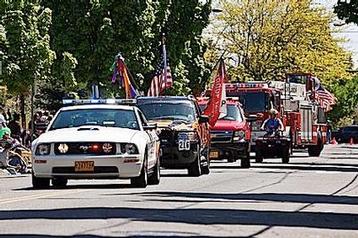 Station 22’s firefighters proudly exhibited the fire engine and truck, waving at the community along the parade route.

The Annual St. John’s Parade is the first official event of the Rose Festival and is the third largest in the City of Portland.  It usually draws close to 2,000 entrants from Vancouver to Salem.

Station 22, serving the Cathedral Park, St. Johns, and Linnton neighborhood associations, is located at 7205 North Alta Street.  The Station was built in 1954 and retrofitted in 2001.  The fire apparatus housed at Station 22 includes a truck, engine, brush unit, utility vehicle, ATVs, and rescue boat.