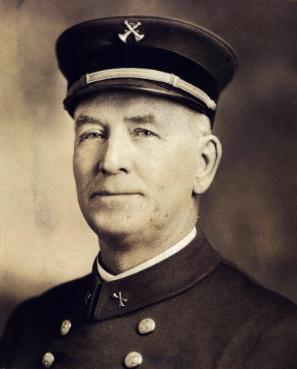 William Heath had served Portland Fire & Rescue for almost 43 years.  He had risen to the rank of Battalion Chief and was assigned to oversee District 1, directing 11 response companies and 96 firefighters.  He was assigned to fire station 22 on 2nd Avenue in downtown Portland.

At 8:45 pm on March 18, 1935, he was dispatched with his crew to the Hotel Lindquist at 1122 SW 2nd Avenue.  After returning, he didn’t feel well but readied himself for the next alarm.  Sometime in the night, Heath suffered a heart attack.  His crew heard him suffering and went to his aid.  They were unable to revive the 67 year old chief.

Heath was hired February 1, 1892 and assigned as driver on Engine 8.  In that time, horses propelled fire engines and he became quite well known for his driving skills and his team of horses.  It would be many years before he would seek promotion before eventually rising to the rank of Battalion Chief.  William Heath is honored by inclusion on the David Campbell Memorial to fallen firefighters in Portland and the Oregon State Firefighter Memorial.

I am a retired Fire Marshal and still train and educate firefighters. I am a 44 year member of the fire service and have lived a lot of change in that time. It is only fitting that we honor those who have gone before us. It is from their knowledge and experience that we do what we do best today. Their skills are lost when they no longer serve the community. Now is the time for all firefighters to remember the heros of the community. They are the history of what we do so well today. Be safe!