The residential fire on SW Highland Parkway was caused by a malfunctioning terrarium heater. The total loss is valued at $1.1 million. The structural loss is estimated at 750,000. The content loss is estimated at 350,000. Investigators have determined that this fire may have been smoldering for a couple of hours before it was discovered.

Portland Fire & Rescue reminds you to turn off/down heating equipment when you'll be away from home if possible. 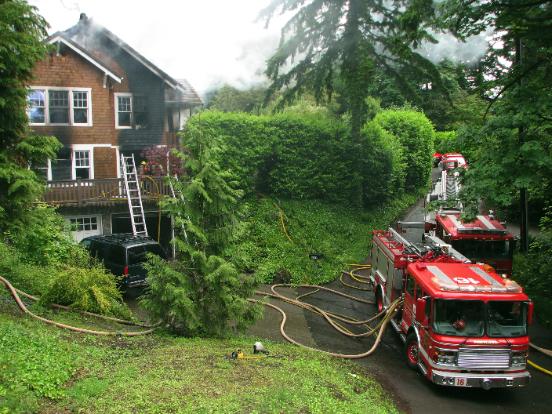 Portland Fire & Rescue and Tualatin Valley Fire & Rescue are on the scene of a residential fire on SW Highland Parkway.  The house was well-involved when the first crews got there; they reported that they could see smoke escaping from under the roof's eaves.

The 2 1/2 story house is up a one-lane driveway that serves several houses.  There is little room for fire apparatus due to the tight curves, and the house is on the uphill side of the drive. 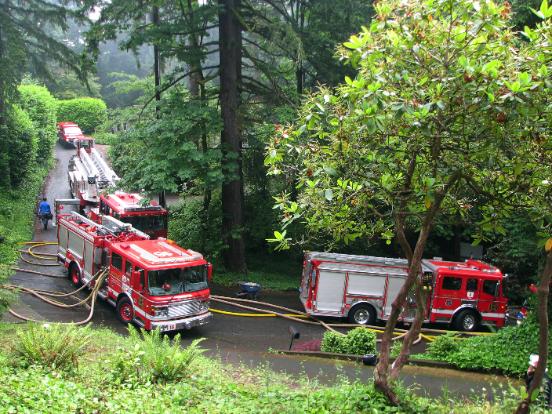 Early in the fire, the incident commander pulled all crews out of the house as the structure became compromised.  Crews are working their way back inside but, at this writing, there is still active fire in crawl spaces and in the attic.  An additional complication is that the roof is beginning to collapse.

No one was inside the house.  An alert neighbor called in the alarm.  It is not yet safe for investigators to begin work. Updates and photos will be provided as they become available.