The most popular attraction was the chance to mix, mingle, and socialize with people of the Lents community.  Firefighters from Station 11 (5707 SE 92nd Avenue) even stopped by to take part in the fun, show their community support, and eat a cheeseburger or two! 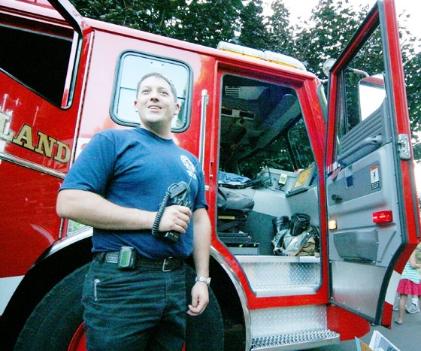 According to Portland Parks and Recreation, Lents Park is named after Oliver Perry Lent, a stonemason who came to Oregon in the 1850s to farm a 190-acre land claim. The area became the center of a growing farm community. George P. Lent, the eldest son of Oliver Lent, platted the town of Lents in 1892. In 1912, the Lents community was annexed from Multnomah County and incorporated into the City of Portland.

According to neighborhood reports, the original 5.2 acres of Lents Park had previously been used as a gravel quarry. During the 1940s and 1950s, an additional 32 acres was purchased from private property owners by the City of Portland in an effort to assemble all of the land between SE 88 & 92 and SE Holgate & Steele for park purposes. In 1953, a central plan was prepared by the City, proposing locations for a baseball stadium, athletic playing fields, tennis courts, community buildings, pathways, and parking areas. Construction on the stadium began in 1956.