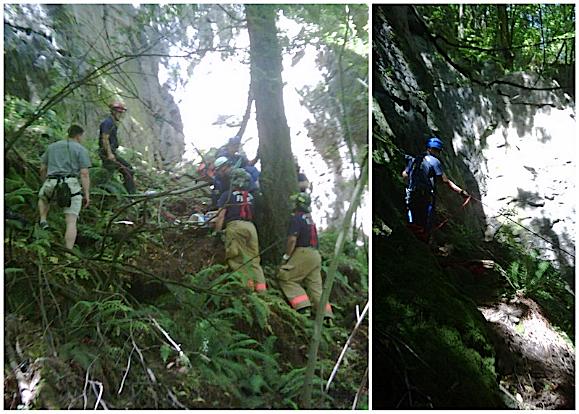 Portland Fire & Rescue responded late this morning to a report of a fallen climber at Rocky Butte. The first-arriving unit went to the top of the Butte and could see the climber laying at east end of the butte at the bottom of the hill near the trail next to southbound I-205. PF&R's rope rescue team made access to the young-adult female who was conscious and decided the best way to remove her would be utilizing a low-angle rope lowering system. Crews packaged the patient up and lowered her from the bottom of the rock face to the lower trail where AMR paramedics where standing by. Patient was transported to Emmanuel Hospital. It is unknown how far patient fell or her condition at this time.

Portland Fire & Rescue (PF&R) is responding to the report of a climber who has fallen at Rocky Butte Park. PF&R's Public Information Officer (PIO) is en route; media staging will be determined when the PIO arrives.