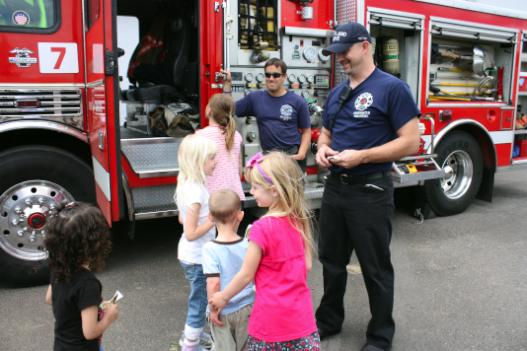 Firefighters Issac and Don from Station 7 interact with campers.

The Police Activities League (PAL) of Greater Portland invited youth in the Multnomah, Washington, Clackamas, and Clark County areas to register and participate in the Twenty-First Annual PAL Sports Camp at David Douglas High School in SE Portland.  During the week of June 21st, local police officers and high school and college coaches from the surrounding areas worked with campers to develop specific sports skills and foster good sportsmanship.

Portland firefighters from Station 7 attended the final day of camp to show their support of the PAL Program and its mission to instill positive life principles and character building tools in an effort to deter juvenile crime and violence. Campers were able to interact and ask questions of firefighters while touring Engine 7.

The Goals of "PAL"

A 501(c)(3) non-profit organization, the Police Activities League of Greater Portland provides educational, recreational, and athletic programs to the youth of the Portland / Gresham metropolitan area with an emphasis on "disadvantaged" youth.

PAL strives to connect law enforcement and youth in a positive way.  The Police Activities League focuses on youth who live in high risk areas, are low income or are classified as "at risk."  More than 85% of the youth that PAL served last year are low-income.  Many of our youth are diagnosed with ADHD, are in and out of the foster care system on a regular basis, or have one or more parent who is incarcerated and/or drug and alcohol affected.

Click here to learn more about PAL of Greater Portland and view more photos of this event on PF&R's Facebook page!