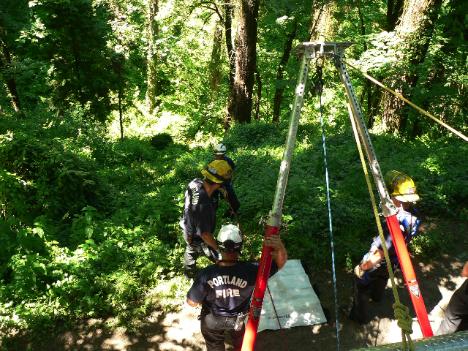 Portland Fire & Rescue (PF&R) has responded to a large number of incidents during the past few weeks related to the public’s increased participation in outdoor activities.  Because spring took a long time in coming to the northwest and good weather has just arrived, PF&R has seen a spike in the number of outdoor-related incidents it responds to. 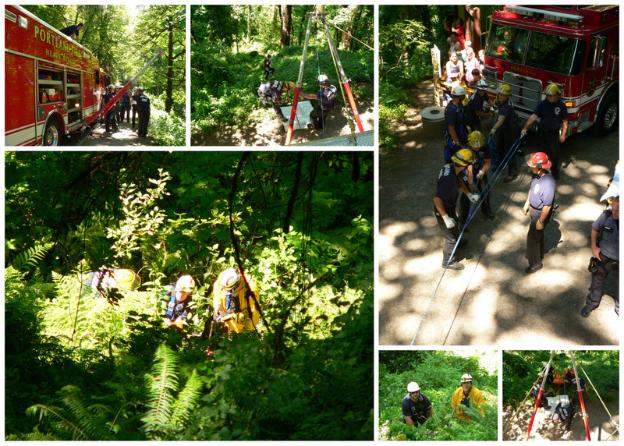 On Saturday, June 26, 2010, crews responded to an incident at Forest Park, which occurred when a hiker lost her balance on the edge of a trail and tumbled down a steep slope.  Two well-intentioned citizens attempted to help the victim and found out that once they went down the hillside, they could not climb back up.

Responding firefighters used an a-frame attached to PF&R’s heavy rescue to employ a rope system that allowed rescuers to safely reach and transport the patient up the slope.  Rescuers then returned to help the other two individuals get back uphill.  During high angle rope rescues, PF&R uses two lines – a main line and a safety line – to ensure the safety of both rescuers and patients.

Last week, PF&R crews performed another high angle rope rescue at Rocky Butte.  PF&R and neighboring jurisdictions have responded to an increased number of summer-related incidents now that the weather has become warmer in the Portland Metro-Area.   PF&R reminds citizens to be aware of their personal safety during summertime activities such as hiking, biking, swimming, and boating.  Also, know your limitations; if you or someone you see is in need of medical attention, call 9-1-1.

Click here to view a photo slideshow of the high angle rope rescue performed at Rocky Butte on June 24, 2010 or visit PF&R's YouTube account at http://www.youtube.com/PDXFireRescue.