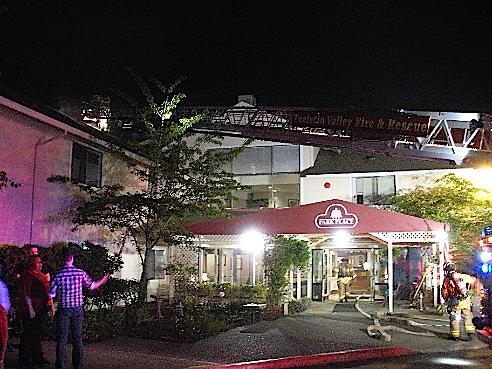 On Sunday, July 5, 2010, firefighters from Tualatin Valley Fire and Rescue (TVF&R) were dispatched to a fire in the roof of a large assisted care facility in Tualatin, Oregon. The first arriving fire units observed smoke in the area and residents being evacuated from the building.  As firefighters used ladders to access the two story building’s roof and began to work to get to the seat of the fire, it became clear that more resources were needed at the scene and a second alarm was called at 10:24 pm.

Firefighters from Portland Fire & Rescue (PF&R) also responded to the scene to provide additional emergency response support. Three people were treated by paramedics at the scene and two were transported to area hospitals for further medical evaluation. A total of 17 fire apparatus from TVF&R, TVF&R Volunteers, and PF&R responded to this incident.  Approximately 75 fire personnel were on scene.

When fire agencies provide emergency response and protection support to one another such as the situation described above, it is called “Mutual Aid.”  PF&R currently participates in mutual aid agreements with all fire agencies bordering the City of Portland including the Port of Portland Fire Department, Vancouver Fire & Rescue, TVF&R, Clackamas County Fire District #1, Lake Oswego Fire Department, and Gresham Fire & Emergency Services. The goal of mutual aid is to lend or receive fire protection and emergency medical services assistance across jurisdictional boundaries.