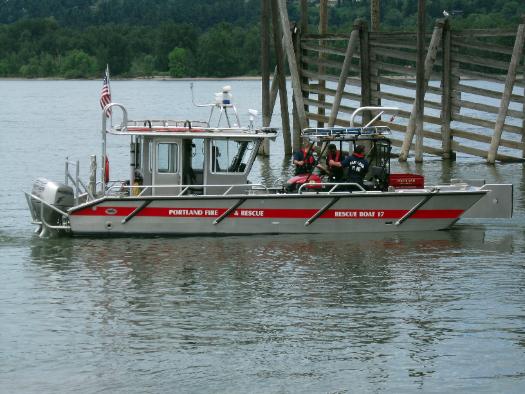 On the evening of Wednesday, July 14, 2010 just after 6:30 pm, Portland Fire & Rescue’s (PF&R) Rescue Boat 17, Fireboat 17, and crew responded on a mutual aid request and pulled a man from the Columbia River after he jumped into the water from the amphitheater and floating boat dock at Vancouver Landing at Terminal One, just downstream from the Interstate 5 Bridge.

PF&R’s Rescue Boat and Fireboat rushed to help the floating man, along with boats from the Multnomah County Sheriff’s Office River Patrol and Vancouver Fire Department’s Rescue Boat 1. PF&R reached the man, pulled him onboard, and returned to the amphitheater dock. He was taken away to a hospital by paramedics with AMR Northwest ambulance service.