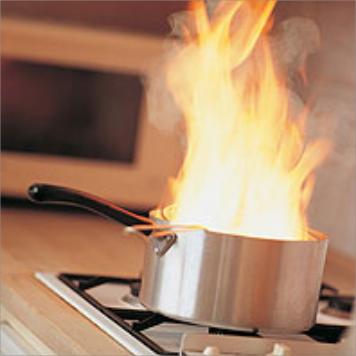 The evening of July 21, 2010, PF&R responded to a building alarm.  When they arrived, they found a young man outside with burns over 20% of his body.  Friends surrounding him explained that he’d tried to move a pan of hot oil off of the stove.  As he was carrying the pan, the lid slipped, and the oil was so hot that it caught fire.  The flaming oil spilled and burned him.

When the firefighters went into the building to check for fire damage, they found another young man, also burned by the spilled, flaming oil.  Both men were transported to the hospital for burn treatment.

Earlier, a woman apparently didn’t notice that the cap had come off of a bottle of starter fluid when she decided to add more to hurry along the smoldering briquettes.  In addition to the briquettes, the starter fluid splashed onto her legs and the siding of the building – and caught fire.  The woman had to be transported to the hospital to be treated for her burns.

PF&R reminds you to use caution any time you are cooking.  Not only can you be burned, but open flames can extend to surrounding cabinets and other combustible items.  Once a fire has been started, never add more starter fluid.