Portland Fire & Rescue responded to a 2-alarm fire at 8101 N. Fessenden Street on Friday, August 6, 2010 at the Shamrock Market. 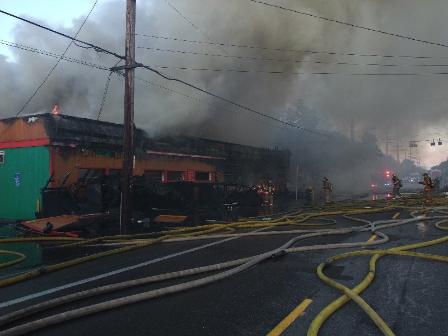 Responding Portland Fire & Rescue Investigators initiated an investigation. After conducting interviews and an examination of the fire scene, investigators have determined that the fire originated in an office area behind a row of beverage coolers.

Investigators identified several potential electric ignition sources within the office area, which was located in the northwest corner of the building. Further independent testing of electrical sources for failure analysis will be necessary to determine a cause. Such testing will be at the discretion of interested, responsible third parties. 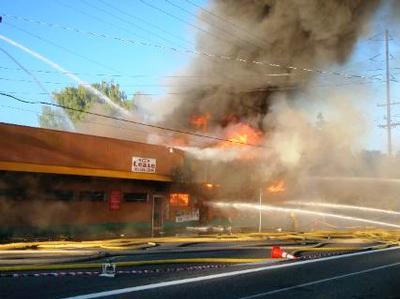 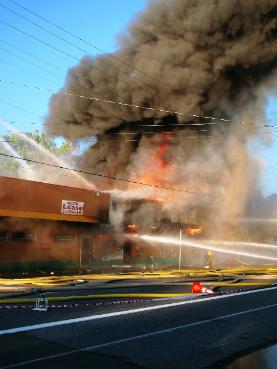 The fire at N. Fessenden Street and N. Oswego Ave is under control as of 8:10 p.m.  Crews are still on scene and, according to Public Information Officer Paul Corah, will probably be there all night to make sure all hot spots are extinguished.

Portland Fire & Rescue was called to the scene at 6:22 p.m.  The fire rapidly extended into the building's cockloft and facade, and a second alarm was called at 6:39 p.m.  A few minutes later, the incident commander ordered all firefighters out of the building when crews reported that heat was building up inside and the fire went through the roof.

Nine engines, two trucks, and a rescue unit responded to the fire.  An air unit and rehab unit supported the firefighters.  About 60 personnel responded, including safety officers and investigators.  Investigators state that it is unlikely that they will be able to enter the building before morning.

Smoke from this fire is staying close to the ground, from N. Oswego to two blocks east.  People with breathing problems are advised to stay indoors near the working fire. 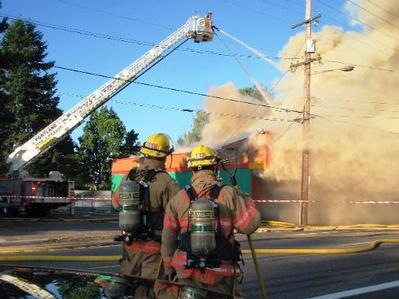 Portland Fire & Rescue is responding to a second alarm fire at 8101 N. Fessenden Street in Portland, Oregon.  First-arriving crews reported that everyone has evacuated the Shamrock Shopping Center. The Public Information Officer Paul Corah is responding and initial media staging will be at N. Charleston and N. Fessenden. 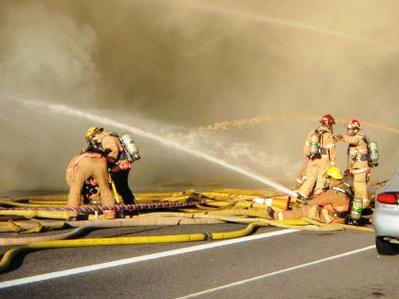 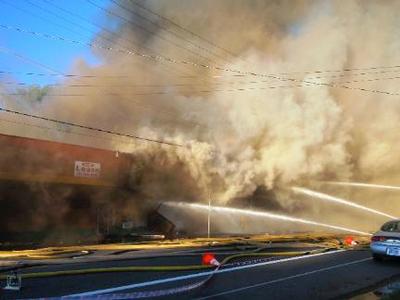 lots of pictures of the fire