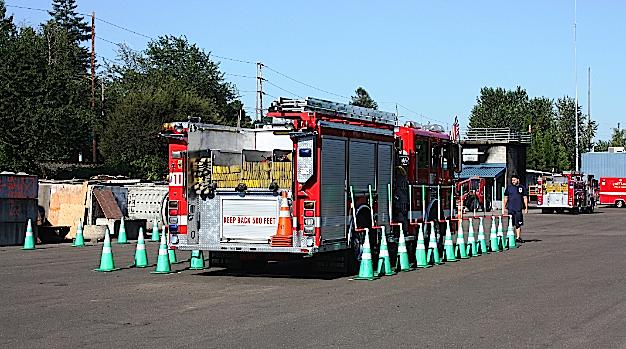 Each year, Portland firefighters are required to practice navigating at a cone course set up at Portland Fire & Rescue’s training grounds in NE Portland.  The course allows the firefighters the opportunity to practice challenging navigation through obstacles in fire trucks and engines. 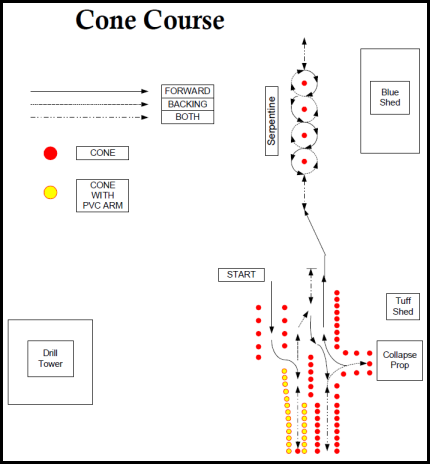 The serpentine course is a series of cones set up with just enough distance between them for the fire apparatus to navigate around. Each driver pulls up past the first cone and then backs in and out of the cones without touching them. Once completed, they then drive forward around the cones in a serpentine movement.

Once the serpentine exercise is complete, drivers move over to the three-point turn. They have a coned-off area within which they must turn the engine and truck fire apparatus completely around with no more than three movements. This simulates a cul-de-sac or some other situation where the fire apparatus must be turned around because there is no outlet.

The next station is called an alley dock. This exercise simulates backing the fire apparatus into the fire station.

The final exercise is practice with diminishing clearance. At the entrance to this challenge, the driver has approximately 16 inches on either side of the fire apparatus when pulling forward. At the end of the path, there is only 2 inches of clearance on either side of the apparatus. This exercise simulates moving through traffic, parked vehicles, or obstacles in the road which would create diminished clearance. 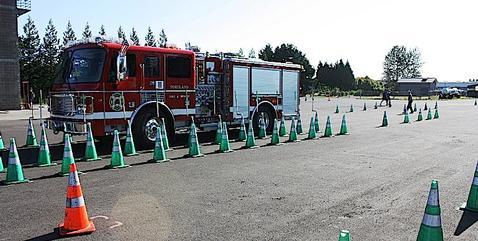 Portland Fire & Rescue conducts training such as this so firefighters can prevent the preventable. The goal is for the firefighters to learn to drive the fire truck or engine assigned to them until they are as comfortable in it as they are in their personal vehicle prevents accidents.