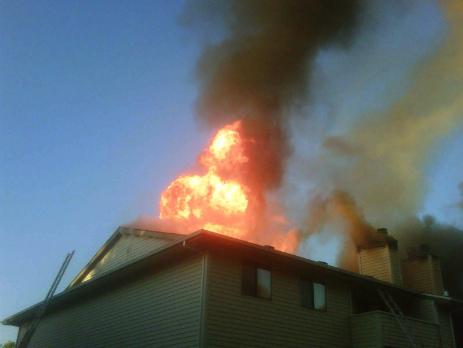 More than 80 Firefighters from Tualatin Valley Fire and Rescue (TVF&R), Lake Oswego Fire Department, and Portland Fire & Rescue battled a three alarm fire at a condominium complex in Tigard on August 23, 2010. One resident suffered smoke inhalation and more than a dozen residents will have to spend the night somewhere else. 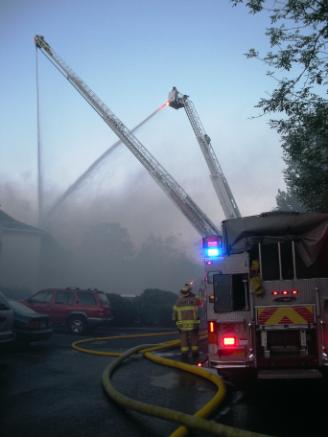 A resident called 9-1-1 at 7:11 p.m. reporting heavy black smoke coming from a condominium at 11048 SW Greenburg Road in Tigard.  Firefighters from TVF&R's Progress Station 53 could see a column of smoke soon after rolling out of their station.  Arriving fire crews encountered a large multiple family condominium complex with dozens of residents evacuating as heavy smoke poured from the building's second and third floors.  Firefighters from Engine 53 performed a quick attack in an attempt to knock down the flames as other arriving fire companies set to work establishing a water supply and advancing on the fire.

Firefighters had to lay more than 1,000 feet of hose from the nearest fire hydrant to the fire engine in front of the burning building.  As firefighters worked to search the involved condos for residents and extinguish the fire, it became apparent that the flames had burned into the building's attic.  At that point the incident commander made the decision to pull firefighters out of the affected units and attack the fire from above with the elevated master streams from Truck 51 and Truck 67.  The large aerial ladders are able to pump several hundred gallons per minute and were an effective tool in stopping tonight's fire.

It quickly became clear that, because of the nature of the fire, the amount of residents affected and the hot temperatures, more fire resources would be needed on scene.  Incident commanders called for a third alarm and activated TVF&R's Incident Management Team (IMT) which brought more firefighters and rehab units to the fire as well as logistical and victim assistance personnel. 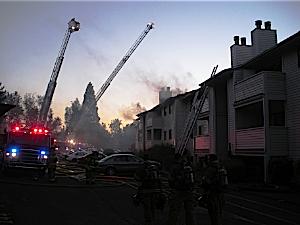 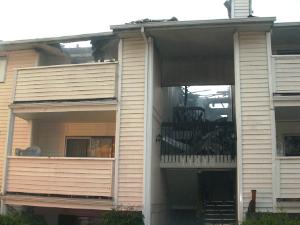 The American Red Cross quickly responded to the scene and is working with dozens of residents who may be displaced by the fire.

A team of fire investigators from Tualatin Valley Fire and Rescue is working to determine the cause of the fire.  Investigators have concluded that the fire originated on the back deck of a second floor condo unit.

One resident suffered from smoke inhalation and was transported to a local hospital.